As the UN moves to clean up the shipping industry, geoengineers and even activists obfuscate and suggest that boats making clouds are either a good thing or a conspiracy.

May be freely reprinted, so long as the text is unaltered, all hyperlinks are left intact, and credit for the article is prominently given to GeoengineeringWatch.org and the article’s author with a hyperlink back to the original story.

So much for giving proper credit. 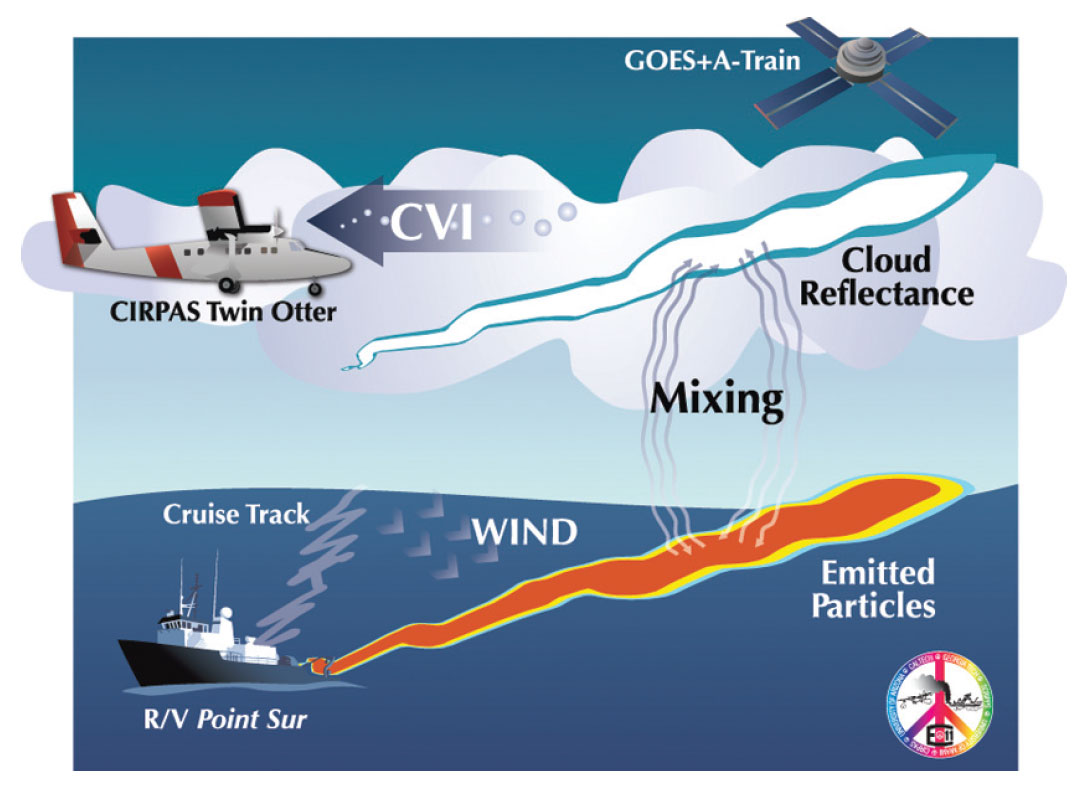 Illustration of E-PEACE design and observations of emitted particles in marine stratocumulus in Jul and Aug 2011 west of central California. The diagram shows the three platforms used in making observations of particle and cloud chemical and physical properties, namely, the R/V Point Sur, the CIRPAS Twin Otter, and the A-Train satellites and GOES. The design included using smoke generated on board the R/V Point Sur that was measured after emission by the CIRPAS Twin Otter in clouds. The satellite was used to measure the changes in reflectance of sunlight due to the effects of the emitted particles on the clouds. The CVI was used as an inlet for evaporating droplets as they were brought into the aircraft, allowing sampling of droplet chemical composition.

HAARP and Project Lucy in the Sky with Diamonds

Try to maintain or even enhance the current cooling effect from currently emitted sulphate aerosols in the troposphere at mid to high northern latitudes.  For example the regulation to ban bunker fuel for ships should be relaxed while encouraging continued use of bunker fuel where the resulting aerosol emissions might be beneficial.  Reduction of sulphate aerosol ‘pollution’ will be unpopular with many environment groups, but the priority to cool the Arctic has to be established. - Arctic Methane Emergency Group - Strategic Plan

What is bunker fuel?

Geoengineering marine stratocumulus clouds - where, when & whether to inject aerosols

“Studies have found that ships have a net cooling effect on the planet, despite belching out nearly a billion tons of carbon dioxide each year. That’s almost entirely because they also emit sulfur, which can scatter sunlight in the atmosphere and form or thicken clouds that reflect it away.”
We’re about to kill a massive, accidental experiment in reducing global warming - MIT Technology Review

At Last, the Shipping Industry Begins Cleaning Up Its Dirty Fuels

In a single day, one cruise ship emits as much particulate as 1 million cars. Learn about the effects of new rules that limit shipping pollution. Insight from @GoldmanSachs

In a single day, one cruise ship emits as much particulate as 1 million cars. Learn about the effects of new rules that limit shipping pollution. Insight from @GoldmanSachs pic.twitter.com/WYJ0wMZnIe

Effects of contrails and ship tracks on climate

These clouds are called ship tracks

#Map shows that #lightning follows shipping lanes: As it turns out particles in ship exhaust increase the likelihood and intensity of thunderstorms. Really cool fact that I had never considered! Source: https://t.co/WaTSDf92V4 pic.twitter.com/7goJVhHH9U

Ship Tracks: Bunker Fuel, Dirty Clouds, and Blatant Lies! by Jim Lee is licensed under a Creative Commons Attribution-NonCommercial-ShareAlike 4.0 International License. Based on a work at climateviewer.com/. Permissions beyond the scope of this license may be available at climateviewer.com/terms.