This article is part of the series: HAARP and the Sky Heaters

The HAARP facility may be closing prompting the obvious question: Why?

Ionospheric Heaters are becoming more compact, opening the door to a myriad of hardware options for sky-altering microwave experiments. Here are just a few:

Someday the U.S. military could drive a trailer to a spot just beyond insurgent fighting and, within minutes, reconfigure part of the atmosphere, blocking an enemy’s ability to receive satellite signals, even as U.S. troops are able to see into the area with radar.

“This scenario may not be far away,” says Defense Tech pal Sharon Weinberger in this month’s edition of the always-excellent Defense Technology International.

The work involves using plasma an ionized gas to reconfigure the ionosphere. Mirage would employ a microwave transmitter on the ground and a small rocket that shoots chaff into the air to produce about a liter of plasma at 60–100 km. (36– 60 mi.) in altitude, changing the number of electrons in a select area of the ionosphere to create a virtual barrier. Ionosphere reconfiguration offers two major applications of interest to the military: bouncing radars off the ionosphere, also known as over-the-horizon radar, and the ability to jam signals from the Global Positioning Satellite system, according to John Kline, the lead investigator for Mirage. [5] This work is only the latest effort in Kline’s more extensive investigations of atmospheric plasmas. Before Mirage, Kline had another contract for a project called Plasma Point Defense, [6] which explored the possibility of using a plasma weapon on board a U.S. Navy surface vessel to protect against threats ranging from surface-to-surface missiles to mortars and rocket-propelled grenades. [7][8] 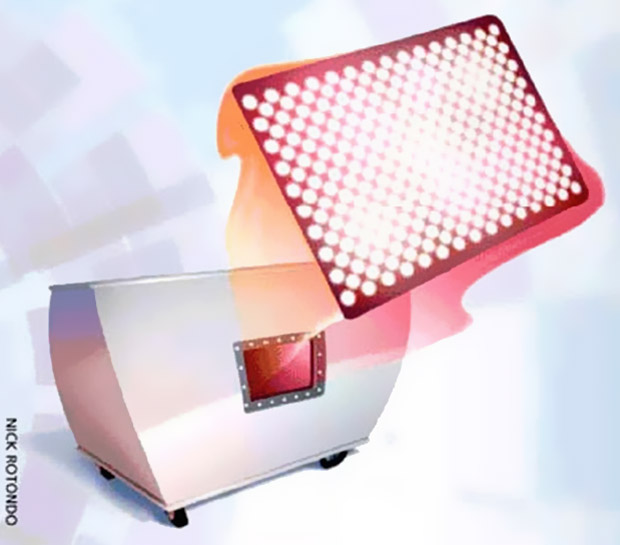 There is evidence that satellite-borne RF sounders can act as mobile ionospheric heaters in addition to performing topside sounding. The main objective of topside sounding is to use sounder-generated electromagnetic (em) waves to obtain ionospheric topside vertical electron-density (N(sub e) profiles. These profiles are obtained from mathematical inversions of the frequency vs. delay-time ionospheric reflection traces. In addition to these em reflection traces, a number of narrowband intense signals are observed starting at zero delay times after the transmitted pulses. Some of these signals, termed plasma resonances, appear at characteristic frequencies of the ambient medium such as at the electron cyclotron frequency f(sub ce), the harmonics nf(sub ce), the electron plasma frequency f(sub pe) and the upper-hybrid frequency f(sub uh), where (f(sub uh))(exp 2) = (f(sub ce))(exp 2) + (f(sub pe))(exp 2) . These signals have been attributed to the oblique echoes of sounder-generated electrostatic (es) waves. These resonances provide accurate in situ f(sub pe) and f(sub ce) values which, in turn, lead to accurate N(sub e) and [B] values where B is the ambient magnetic field. Resonances are also observed between the nf(sub ce) harmonics both above and below f(sub uh). The former, known as the Qn plasma resonances, are mainly attributed to the matching of the wave group velocity of sounder-generated (Bernstein-mode) es waves to the satellite velocity. The frequency spectrum of these waves in the magnetosphere can be used to detect non-Maxwellian electron velocity-distributions. In addition, these resonances also exhibit components that appear to be the result of plasma emissions stimulated by the sounder pulses. The plasma resonances observed between the nf(sub ce) harmonics and below f(sub uh), known as the Dn plasma resonances, are entirely attributed to such sounder-stimulated plasma emissions. There are other sounder-stimulated plasma phenomena that also fall into this category, e.g., ion affects on electron-resonant phenomena, proton-cyclotron echoes and N(sub e) field-aligned irregularities (FAI). Some of these phenomena are more pronounced when f(sub pe)/f(sub ce) approx. = n where n is an integer significantly greater than one. The observations suggest that the sounder-stimulated plasma phenomena are stimulated, or enhanced, on a time scale much less than one second. The purpose of this presentation is to review the above topics with particular emphasis on the sounder-stimulated plasma phenomena.

The need to act on methane in the Arctic is such that, most likely, a range of methods will need to be deployed in parallel. Lucy has the potential to be very effective, as it can decompose methane while any resulting nano diamond powder could also reflect sunlight back into space. Project Lucy therefore aims to design, build and test a microwave transmission system targeting low-altitude methane clouds with the aim of breaking the first C-H bond as soon as the methane erupts into the atmosphere from the Arctic Ocean.

The transmitters can be mounted on submarines, planes and after 2015 on boats and drilling rigs when the Arctic ice cap has melted

The noctilucent clouds help reflect the suns heat back into space so if we can break down more methane with the HAARP or Lucy transmitters we should generate more clouds and thus help reverse global warming by:-

b) Generating sunshine reflecting noctilucent clouds in increasing amounts in the mesosphere which will reflect the suns energy back into space.

If we could transmit 13.56 MHZ on the IRI transmitter and use the other radars and optical cameras to look for reflections from noctilucent clouds formed from the breakdown of methane in a circular zone above the HAARP transmitter we should be able to effectively test the system. There ought to be a buildup of the noctilucent clouds in the area where the HAARP transmissions are focused on the ionosphere. If it works there are 4 other similar facilities in the world (Hipas, Alaska; Arecibo, Puerto Rico, EISCAT, Norway and Sura, Russia) where they could immediately attack the atmospheric methane as well. 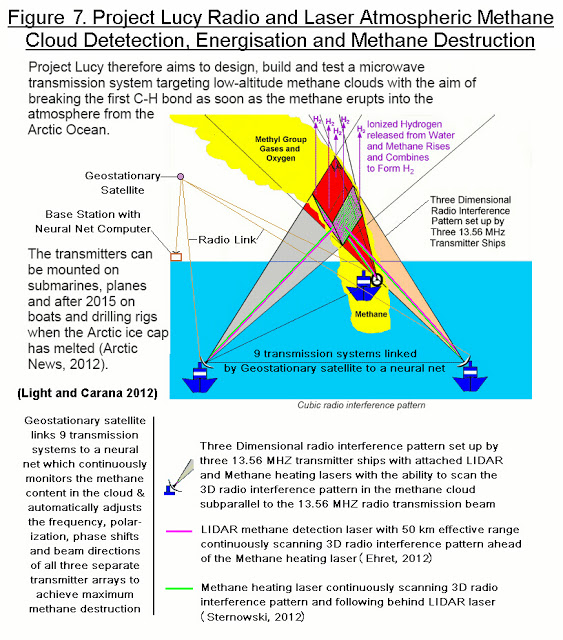 Why in the world would they close the HAARP facility? Would you believe me if I told you they are planning on dragging HAARP barges around the ocean? [10] Here is the REAL answer: 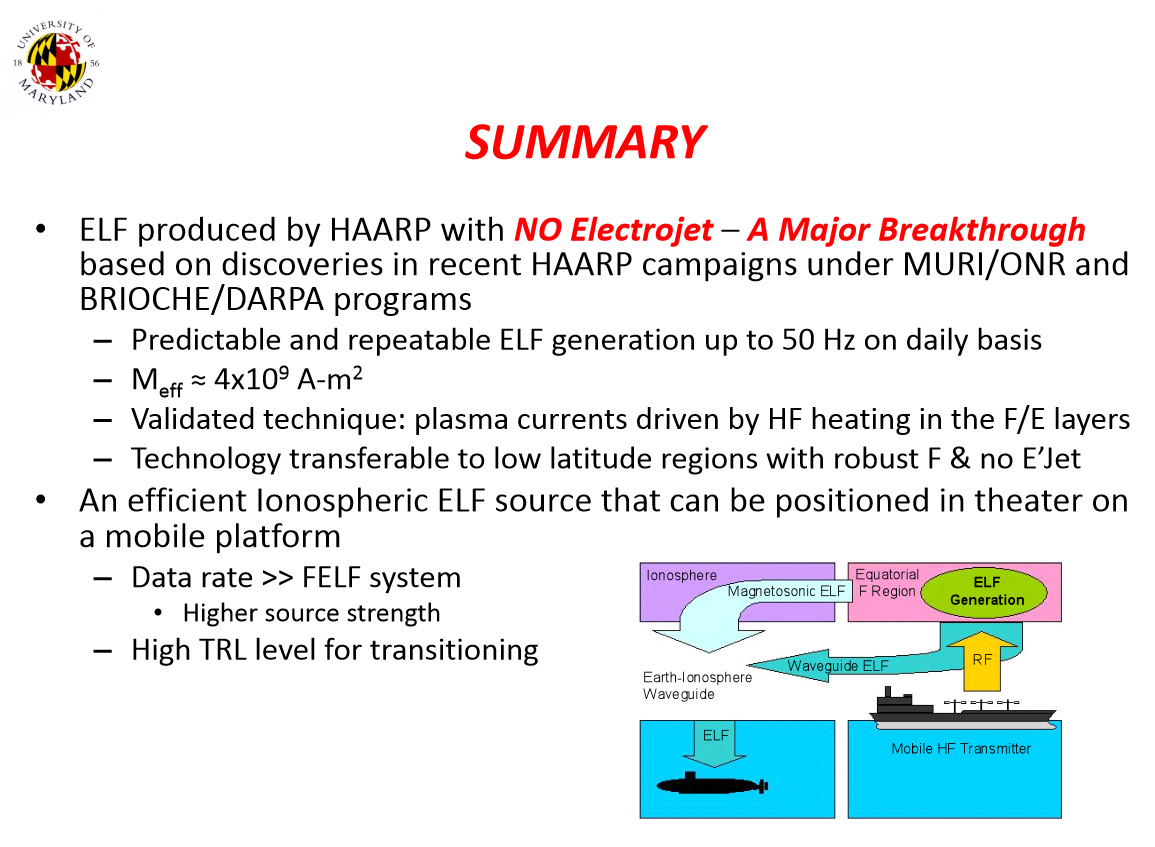 On the Viability and Requirements of a Barge Based ELF System, 2010 [10]

Now that Ionospheric Heaters are no longer polar-bound, ELF heaters are ready the for the high seas!

The Challenge • Utilize new concepts of meta-materials active nonlinear materials operated at high power microwave (HPM) devices to replace the current large collection of sources used in traditional heaters with a single, mobile, and cheap high‐power amplifier at the required HF frequencies • Mobile inexpensive sources will revolutionize the science and operations of ionospheric modification Objective Assemble team of physicist and engineers from space science, ionospheric modification (IM), plasma modeling and HPM to re‐examine the coupling of EM energy to the ionosphere under different geomagnetic latitudes and conditions Outline research program to : • Determine the key properties of the EM source (frequency, ERP, Power, waveform, phase, modulation,..)required to explore EM-­‐Plasma coupling and other the critical physics questions as a function of geomagnetic location and ionospheric conditions • Define and design modern, efficient, powerful, tunable EM sources for IM and provide hardware testing under typical university HPM laboratory conditions (vacuum loads and/or anechoic chamber) • Develop theoretical tools and framework to design feasibility experiments to demonstrate and test the results of the IM research [11]

Did they just say “Artificial Clouds?” Let me explain.

Some of you may have heard the term “Artificial Ionospheric Mirror” as seen in one of HAARP’s related patents. These “artificial clouds” are radio-reflecting plasma clouds, used as a mirror in the sky to reflect radio signals over the horizon. [12] 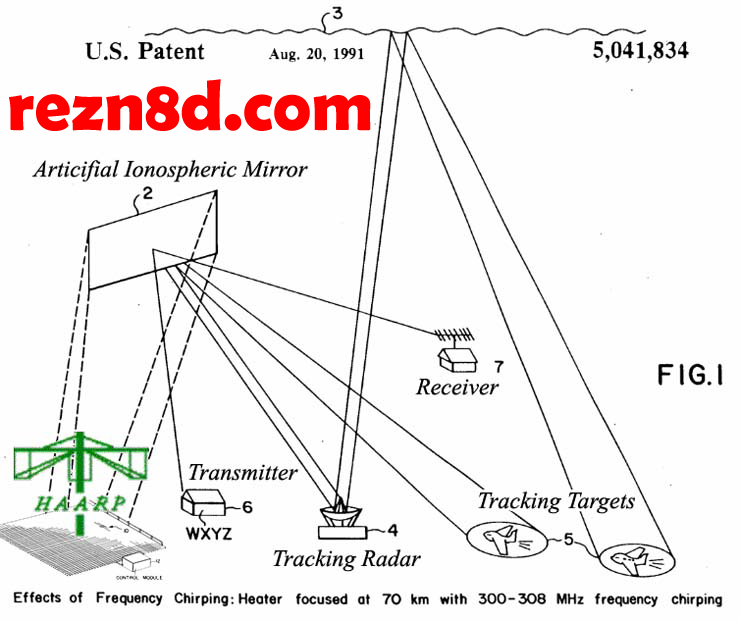 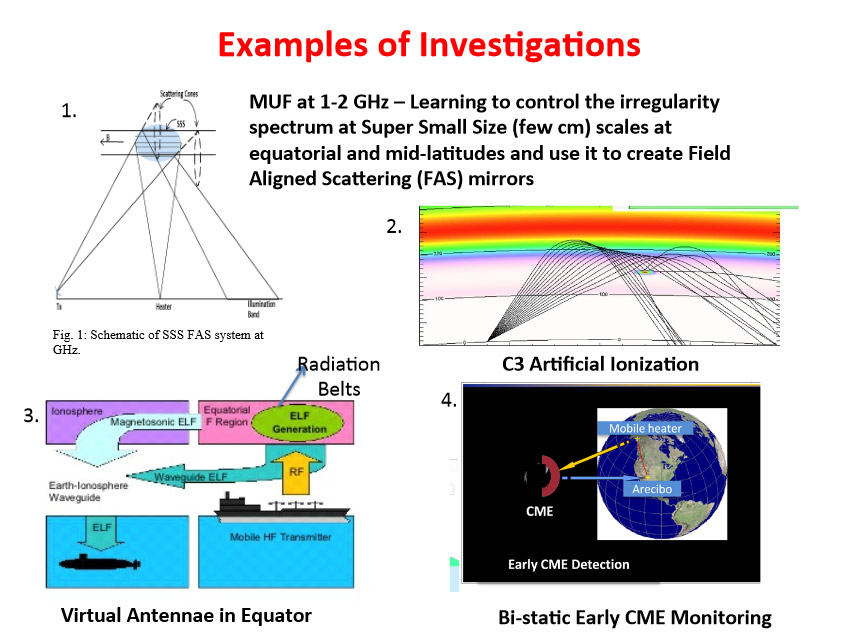 The Strawman HF Array is the new standard in HAARP technology; cheap and portable. 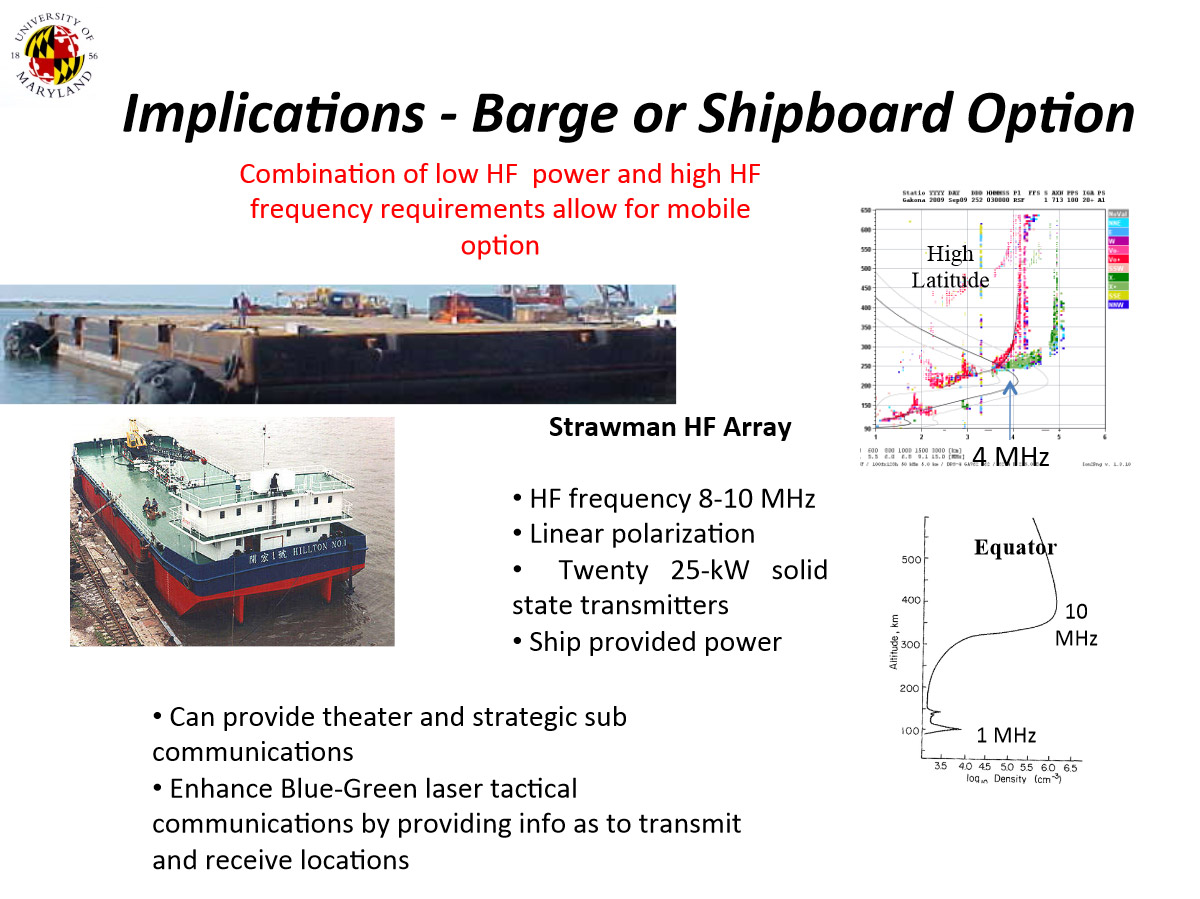 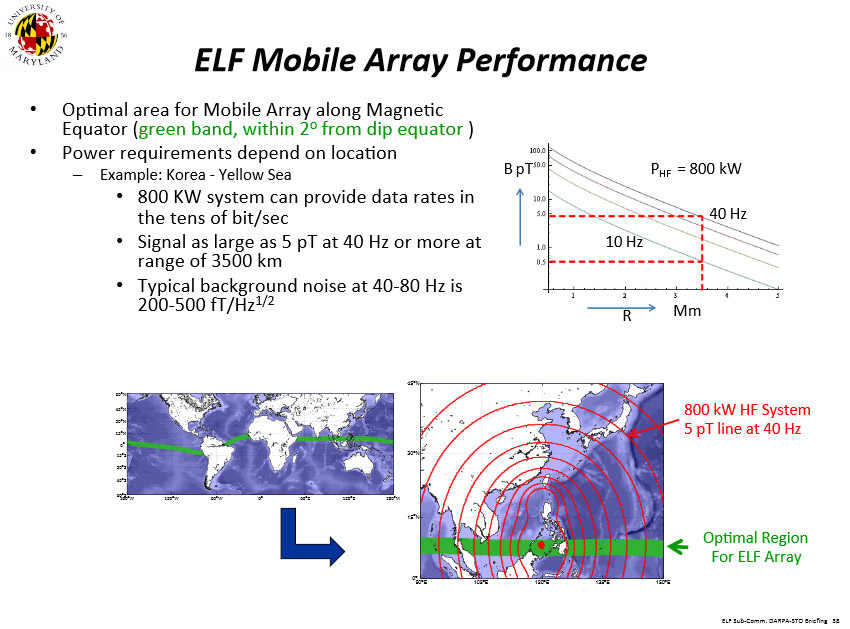 See the green belt? That means there are HAARP boats coming to an ocean near you!

What is so special about this green ELF belt? There you have it folks! HAARP arrays on trailers, trucks, boats, planes, submarines, oil rigs, and barges, OH MY!

As these boats are fleshed out, built, and tested, expect that I will keep you all up date on the latest in mobile ELF generation and Sky Heating!

Enjoy the headaches. Now you know why they are closing HAARP.

This HAARP boat is real!

This article is part of the series: HAARP and the Sky Heaters Also see our Space-Weather Modification Timeline