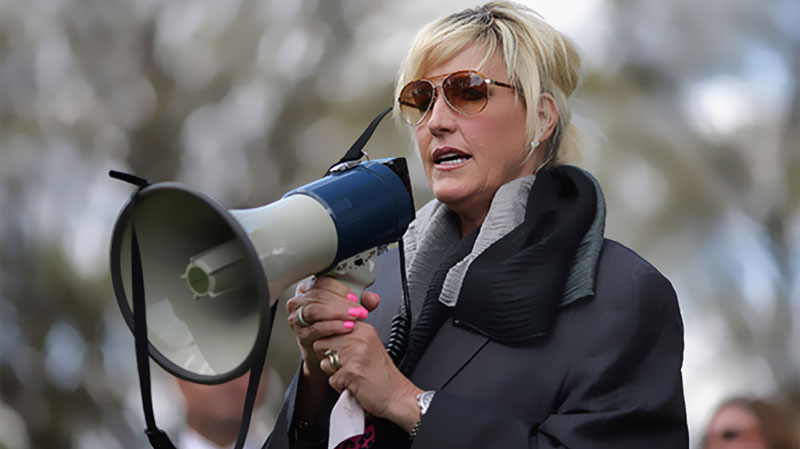 Environmental activist Erin Brockovich and dozens of military veterans rallied outside the Supreme Court today as the justices heard arguments that an electronics company was responsible for contamination at its old plant in Asheville, North Carolina.

The case, CTS Corporation v. Waldburger, will decide if federal environmental law preempts North Carolina’s statute of repose, which imposes a 10-year limit to file a claim. A ruling by the Supreme Court in favor of CTS Corporation could create a climate in which corporate polluters would be “rewarded” for concealment and material misrepresentation of their environmental problems.

“It’s probably one of the largest pollution problems we have in the country. We have service men and women coming home to their families who had no idea the land they were living on was polluted, that their families have been poisoned, that their children are dying,” Brockovich said at the rally.

According to North Carolina state law, the victims may no longer have the legal recourse to sue. CTS Corporation sold the land and shut down the plant in 1987. The state statute relieves the company from any liability 10 years after its last contaminating act — making 1997 the deadline to sue, despite the fact that the chemicals weren’t discovered until 1997.

The court heard oral arguments in the case today.

“We just want the opportunity to present our cases in court and allow the merits of our cases to be the determining factor,” said Ensminger, who lost his 9-year old daughter to leukemia and is convinced her leukemia was caused by the water contamination.

Tim Templeton from Kansas City, Missouri, helps run a Facebook group called “Contaminated Marines of Camp Lejeune.” Templeton was stationed at Camp Lejeune and maintains that he is a poisoned patriot suffering from an immune deficiency. “Government can have its cake and eat it too, which they do. I would say it’s awful strange and doesn’t really square with reality for them to be supporting the polluters side of the argument just merely because of the convenience,” Templeton said.

The Department of Justice has sided with CTS Corporation.

“We are referring to [the DOJ] as the Department of Injustice. How could you possibly side with the contaminator? This is an example of the Department of Justice coming off the tracks. They have lost their way,” said Tate McQueen, one of the litigants.

The court will consider whether a federal environmental law can override state law. The federal law allows victims to move forward with their claims when they first learned they had been sickened by chemicals at Camp Lejeune.

“At the surface to see a brief come out of this current administrations office AG that stands with CTS – that isn’t going to stand with a soldier at Camp Lejeune. It looks like they are trying to get out of cleaning up their own mess. That’s not fair, that’s hypocritical and I find it really disappointing and very concerning, and it would concern any vet,” said Brockovich.

For experts, the case called CTS Corp. v. Waldburger centers on the relationship between state and federal laws and the ticking of the courthouse clock. Simply put, it’s about how long people have to sue polluters when they’ve been harmed. Being the law, though, it’s rarely that simple.

“This is angels on the head of a pin, isn’t it?” Justice Antonin Scalia asked Wednesday, after one abstract exchange in an argument that periodically seemed to favor CTS.

For a host of North Carolina residents and former Camp Lejeune Marines, the technical argument Wednesday rarely touched the personal depths that carried them to court in the first place. It comes down to this: If CTS Corp. and its Obama administration allies win, as they well might, a number of North Carolina-related environmental lawsuits and health claims will fail.

“This is a sad day,” said retired Marine Corps Master Sgt. Jerry Ensminger, who came up from his home in Elizabethtown, N.C., for the argument. “Basically, what the Department of Justice is trying to do here is take away the very rights that we fought for.”

Ensminger served 24 years in the Marine Corps. He did multiple stints at Camp Lejeune, where he and his family members were unknowingly exposed to contaminated water. His daughter Janey was subsequently diagnosed with leukemia when she was 6; she died when she was 9, in 1985.

Along with many others who served at Marine Corps Base Camp Lejeune, Ensminger is pursuing a claim against the federal government. The government’s defense relies, in part, on the same position CTS Corp. took in the separate case heard Wednesday. Consequently, the court’s eventual ruling in CTS Corp. v. Waldburger will also affect the Camp Lejeune cases.

Supreme Court to set limits on suing Corporate Polluters by Jim Lee is licensed under a Creative Commons Attribution-NonCommercial-ShareAlike 4.0 International License. Based on a work at climateviewer.com/. Permissions beyond the scope of this license may be available at climateviewer.com/terms.