The Birth of HAARP and the Sky Heaters

This article is part of the series: HAARP and the Sky Heaters 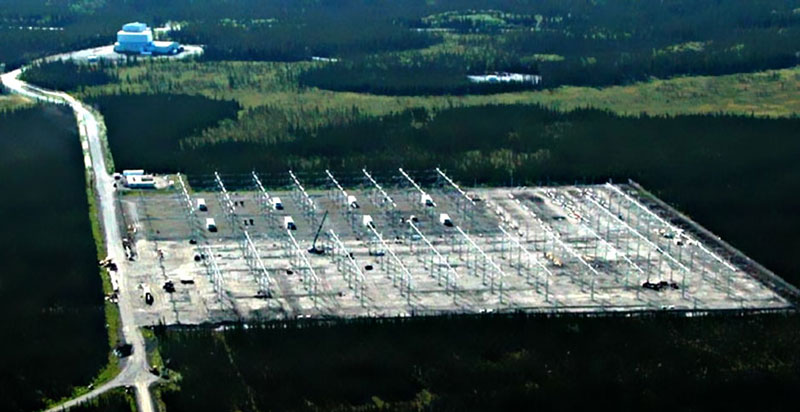 The Cold War left us with a very Hot Problem: Sky Heaters

All over the globe, high-powered microwave antennas are beaming electricity into our skies and heating chemicals released by rockets and satellites. Heating these tracer chemicals allows scientists and military evil-geniuses to create fireballs in space, shoot massive amounts of electricity around the globe, reflect radio waves off artificial sky mirrors, probe the underground for caves filled with nuclear missiles, and create ELF waves that make you bitchy and may be linked to mass-animal deaths. This article will take you from the final days of upper atmospheric nuclear testing to today's sophisticated world of beam-generating rockets, protecting satellites from solar flares and EMP attacks, and so much more. Sky Heaters are bleeding-edge technology with very complicated terminology, so expect to do tons of reading if you really want to grasp the scope of issues related to Sky Heaters like HAARP. Let us begin:

"The Starfish Prime radiation belt had, by far, the greatest intensity and duration of any of the artificial radiation belts, and it could take many hundreds of years for the Van Allen Belts to restabilise at their normal levels." Source

Aluminum exhaust released from rockets, like the Atlas, Saturn, and even the Space Shuttle's OMS pods cause airglow and tear holes in the ionosphere, which was studied by ground-based radio-frequency heating facilities. Please read a more lengthy article by Rosalie Bertell on this fascinating period.

Each time a space shuttle is launched, the solid rocket boosters release 240 tons of HCl gas, 26 tons of chlorine gas, 7 tons of nitrogen dioxide gas, and 304 tons of aluminum oxide into the atmosphere. The resulting hydrochloric acid dissolves eight inches of concrete on the launch pad, raises the concentration of hydrochloric acid in nearby lakes to 3 M, produces massive fish kills in the ocean, and destroys the paint on cars. Leading chemists believe that the HCl (hydrochloric acid) is a major contributor to the holes in the ozone layer.

During Project West Ford, 480,000,000 copper dipole antennas were launched into orbit, which was a test carried out by Massachusetts Institute of Technology's Lincoln Laboratory on behalf of the United States Military in 1961 and 1963 to create an artificial ionosphere above the Earth. This was done to solve a major weakness that had been identified in US military communications. After that came barium, lithium, and sulfur hexaflouride releases from rockets and satellites. The CRRES satellite released chemicals into the ionosphere which were heated by the Arecibo facility.

But hopes that the Christofilos effect would provide a defensive shield against Soviet missiles faded quickly. The electron belts created by the experiments were too weak and transitory to do much damage to enemy missiles that would pass through them at thousands of miles per hour. Christofilos, dubbed "the Crazy Greek" by the press, continued to explore ideas (some of which are still classified) until his death in 1972. Fifty years after Argus, however, the Crazy Greek doesn't seem quite so crazy. Space-based nuclear tests in the early 1960s proved that the Christofilos effect could disable satellites. Now that near-Earth space harbors hundreds of satellites of critical economic and military importance, strategists are considering the Christofilos effect anew. Even a technologically humble rogue state could launch a missile and detonate a low-yield nuke high over its territory, creating a Christofilos effect that would cripple the satellites of its more sophisticated rivals. Source

The Birth of HAARP 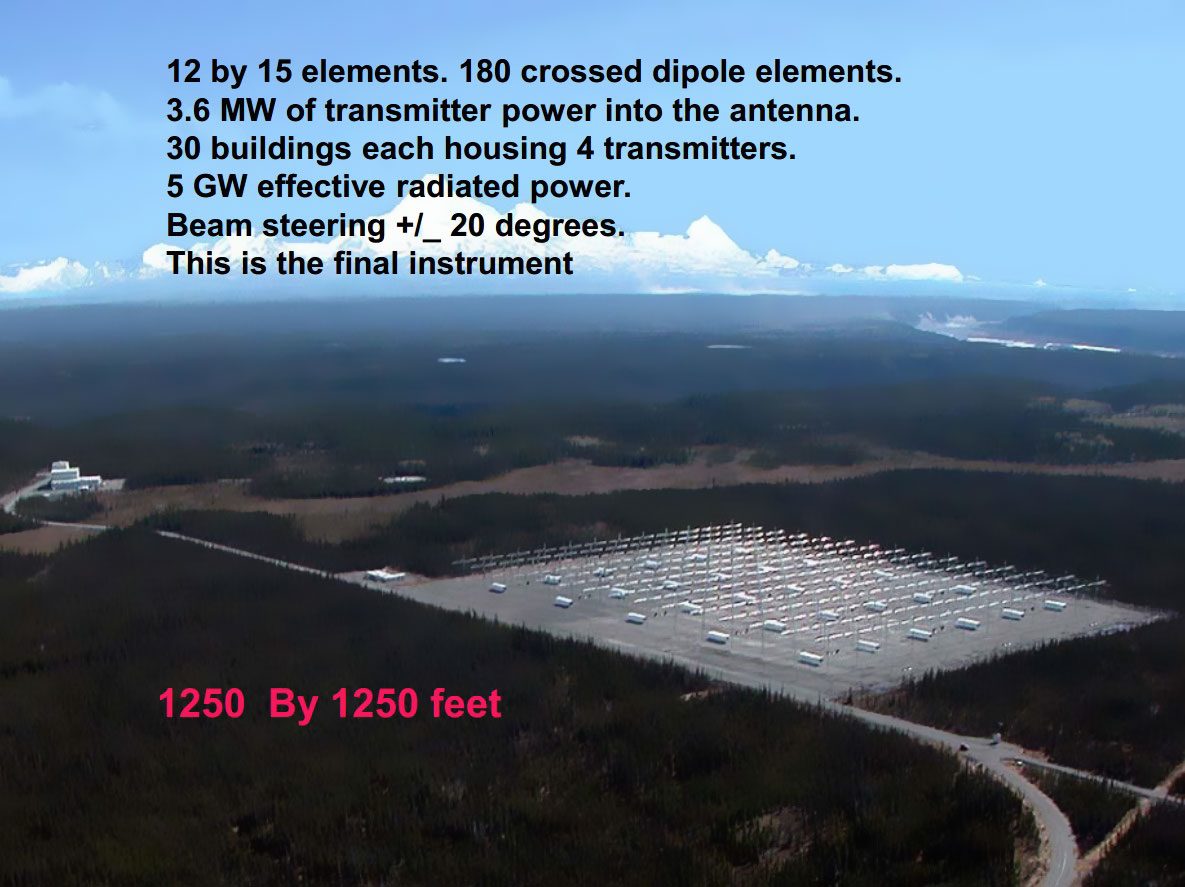 Source: Early Experiments at the Arecibo Observatory---Cross Modulation
for Measuring D-Region Electron Densities Generation of ELF/VLF
Signals by Modulating the Dynamo Current System
The High Frequency Active Auroral Research Program (HAARP) is currently the world's premiere ionospheric modification facility, operating at 2.8-10 MHz antenna array with a 5.1 Gigawatt effective radiated power. Here is the short history of how and why it was made:

Sounding rockets with beam generators are launched from Poker Flat Research Range, which burn a hole in the ionosphere. Electrons race down the newly formed hole, and HAARP's Ionospheric Research Instrument heats the area inside the hole. A second RF source, like the MUIR, AMISR (RISR-N, RISR-C, and PFISR), HIPAS, or SuperDARN, is used to study and/or reflect signals off of the "artificial ionospheric mirror".

In fact, there are several rocket ranges and ionospheric heating facilities worldwide and HAARP is just the tip of a very large iceberg. With an ERP of greater than 100 gigawatts, the upcoming EISCAT 3D in Tromso, Norway should give HAARP a run for its money. 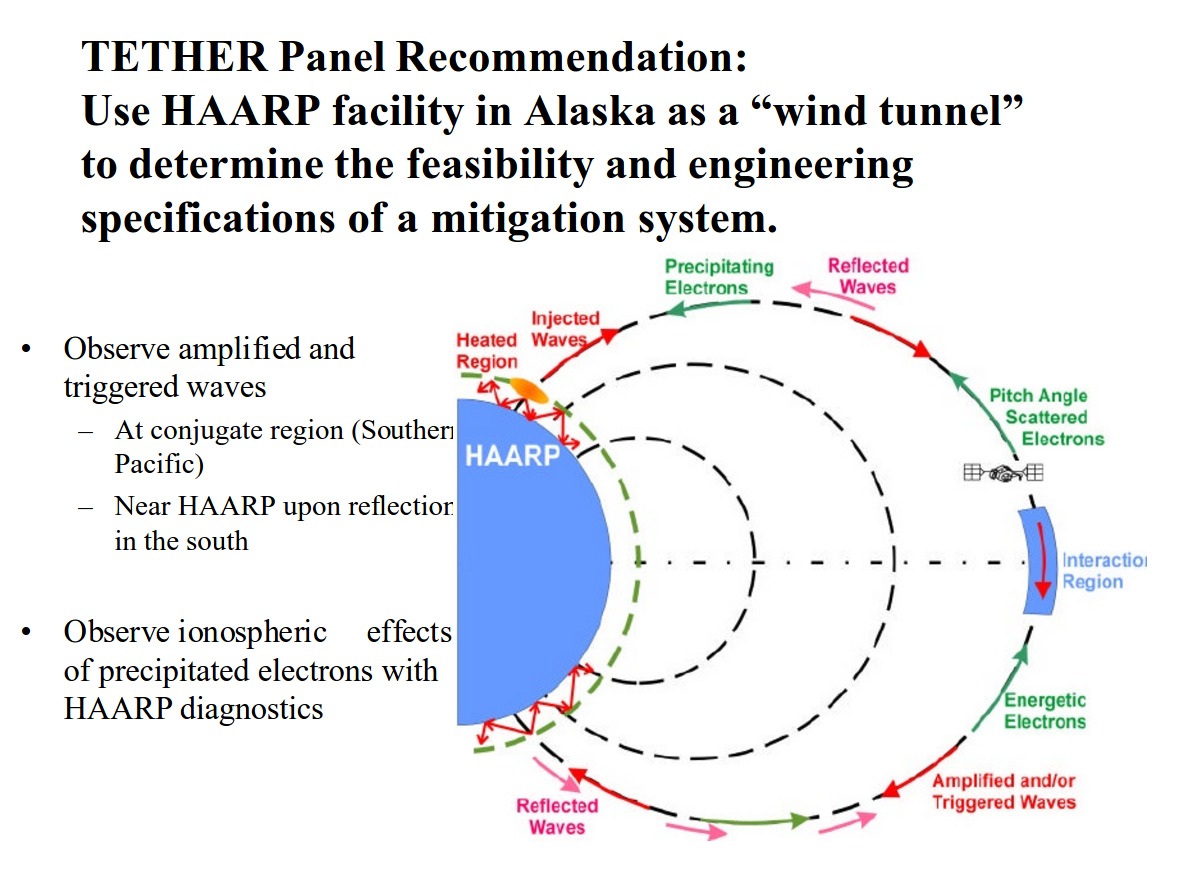 Navy Research Lab Scientists Produce Densest Artificial Ionospheric Plasma Clouds Using HAARP. "This higher density plasma 'ball' was sustained over one hour by the HAARP transmissions and was extinguished only after termination of the HAARP radio beam." November 12, 2012 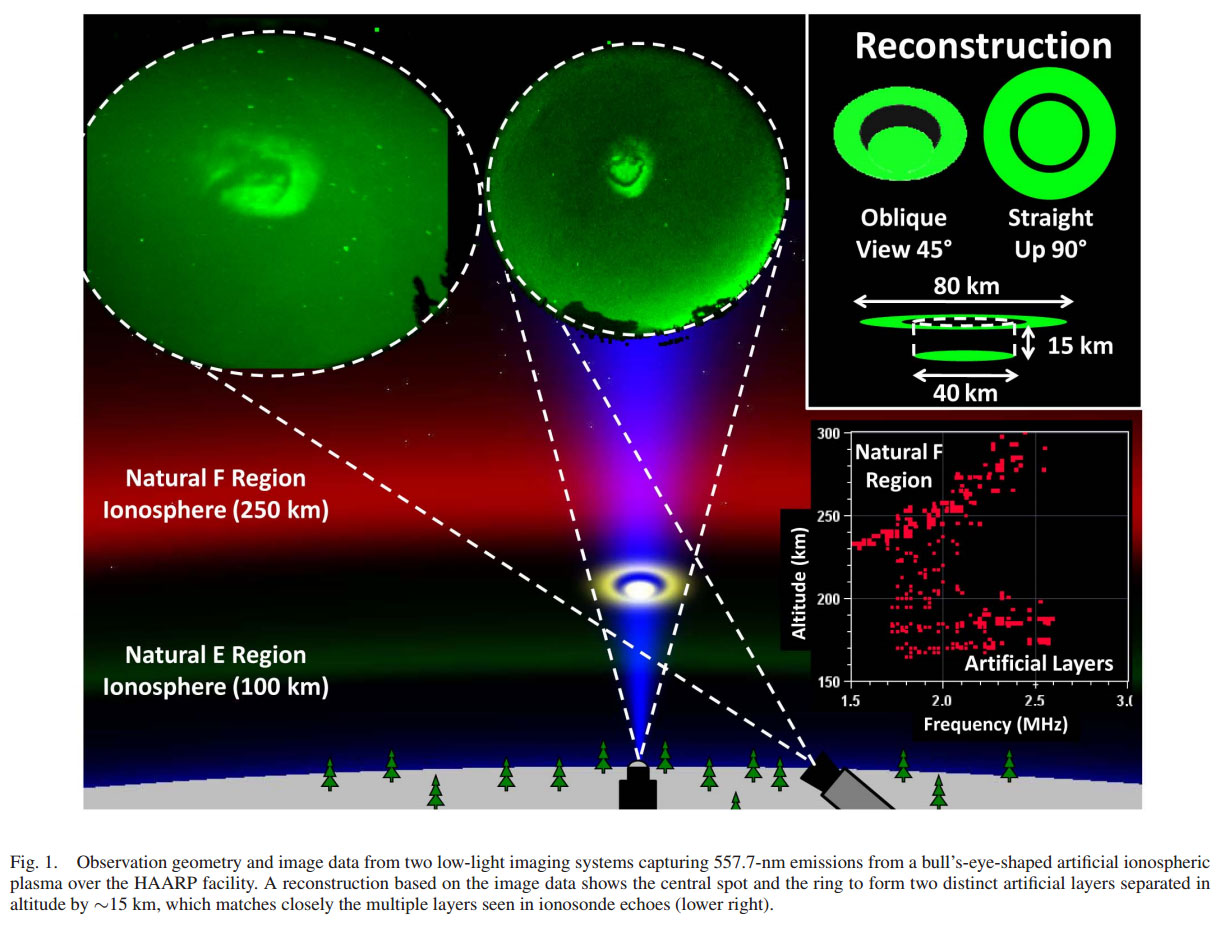 Fig. 1. Observation geometry and image data from two low-light imaging systems capturing 557.7-nm emissions from a bull’s-eye-shaped artiﬁcial ionospheric plasma over the HAARP facility. A reconstruction based on the image data shows the central spot and the ring to form two distinct artiﬁcial layers separated in altitude by ∼15 km, which matches closely the multiple layers seen in ionosonde echoes (lower right). Source: AFRL, Multisite Optical Imaging of Artificial Ionospheric Plasmas, November 9, 2011
Most of the material contained herein is summarized in a video I previously released:
• Watch this Video on YouTube

Someday the U.S. military could drive a trailer to a spot just beyond insurgent fighting and, within minutes, reconfigure part of the atmosphere, blocking an enemy’s ability to receive satellite signals, even as U.S. troops are able to see into the area with radar.
MIRAGE on Scribd

The need to act on methane in the Arctic is such that, most likely, a range of methods will need to be deployed in parallel. Lucy has the potential to be very effective, as it can decompose methane while any resulting nano diamond powder could also reflect sunlight back into space.Project Lucy therefore aims to design, build and test a microwave transmission system targeting low-altitude methane clouds with the aim of breaking the first C-H bond as soon as the methane erupts into the atmosphere from the Arctic Ocean. The transmitters can be mounted on submarines, planes and after 2015 on boats and drilling rigs when the Arctic ice cap has melted (Project Lucy Extended Version 4, Arctic News, 2012).

Strawman HF Array
The next time someone complains about crazy weather or global warming, tell them:

"Then turn off the damn Sky Heaters"