The Death of Google Earth and the old ClimateViewer 3D

ver the past three years, I have mapped polluted communities, top secret military installations, and other health and privacy related locations using the Google Earth application for Windows. 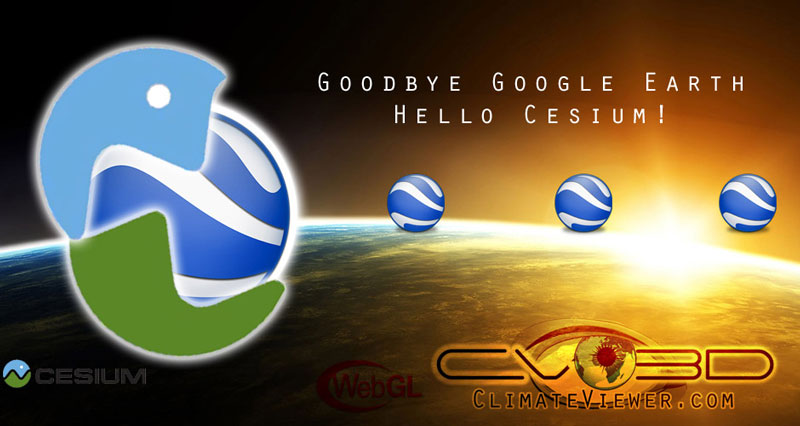 Over the past three years, I have mapped polluted communities, top secret military installations, and other health and privacy related locations using the Google Earth application for Windows.

The best thing about maptivism with Google Earth was the ability to save your map as a Keyhole Markup Language (KML) file, then share it on the web or embed it on a website using Google Earth’s web browser plug-in. I had to teach myself to make a website using HTML 5 then learn the Google Earth API to be able to create ClimateViewer 3D, and now it is all coming to an end.

the Earth API is built on a technology called the NPAPI plug-in framework, and recently, for security reasons, both Chrome and Firefox have announced they’re removing support for this framework. These security reasons, combined with dwindling cross-platform support (particularly on mobile devices), had made building applications that leverage the Earth API untenable for developers.

Therefore, after careful consideration, we have decided to retire the Google Earth API. Per our deprecation policy, the API will be supported until one year from today and will be turned off on December 12, 2015. If that were true, then why has Google already blocked the GE plugin in Chrome 64 bit on Macs?

NPAPI is based on an old Netscape-era plug-in framework that makes installing plug-ins in web browsers easy. Google is stating that mobile browsers do not support plug-ins and security concerns have rendered the whole thing obsolete. ClimateViewer 3D’s Google Earth plug-in isn’t alone, several widely used plug-ins are dying along with it:

Did you know Netflix runs on Silverlight? They thought they had eight years to prepare for this change, they were wrong:

But since Microsoft announced the end of life of Silverlight 5 in 2021, we need to find a replacement some time within the next 8 years. We’d like to share some progress we’ve made towards our goal of moving to HTML5 video. source: HTML5 Video at Netflix April 15, 2013

So what in the hell is going on? Keep reading that article and you will see your answer:

We’ve been working with Google to implement support for the HTML5 Premium Video Extensions in the Chrome browser, and we’ve just started using this technology on the Samsung ARM-Based Chromebook. Our player on this Chromebook device uses the Media Source Extensions and Encrypted Media Extensions to adaptively stream protected content. WebCrypto hasn’t been implemented in Chrome yet, so we’re using a Netflix-developed PPAPI (Pepper Plugin API) plugin which provides these cryptographic operations for now.

PPAPI is turning out to be quite controversial, here is a short history:

On August 12, 2009, a page on Google Code introduced a new project, Pepper, with the associated Pepper Plugin API (PPAPI), “a set of modifications to NPAPI to make plugins more portable and more secure”

Google’s replacement for NPAPI would be a good thing, except Firefox said “No soup for you!”

“Mozilla is not interested in or working on Pepper at this time.” May 2011

Then Adobe jumped on the Google bandwagon:

In February 2012, Adobe Systems announced that future GNU/Linux versions of Flash Player would only be provided via PPAPI, although the previous release, Flash Player 11.2, with NPAPI support, would receive security updates for five years.

In the end, these browser wars are going to be real interesting to watch. Now that we know that we are not alone in this struggle, we are searching for a replacement as Google clearly left us all hanging:

Google Earth has a proud legacy, which continues with the new Google Earth for Android, powered by a brand new renderer. 3D is in our blood, and while we can’t announce anything just now, we look forward to sharing more exciting product news in the future. source: Announcing deprecation of the Google Earth API

Since Google has not announced a replacement for the GE Plugin, the majority of Google Earth based websites are converting to the open-source Cesium 3D globe. Cesium is based on WebGL meaning no plugin necessary, all you need is an HTML5 browser and a 3D video card in your device. This new Cesium powered app will exponentially expand our ability to see real-time data and connect the dots in innovative ways. Turns out Raytheon has made a demo called Vega that does everything we are hoping to bring to the open-source community for free, here’s what our new app should look like:
• Watch this Video on YouTube

I first discovered Cesium back in June of 2012 and have been closely following their progress.

Getting our Google Earth KML files into Cesium has been a long process that is now nearing completion!

ClimateViewer 3D will die, and from its ashes will rise a mighty phoenix: ClimateED (name subject to change).

In the following video you will see our crowd-sourced reporting app then you will see an image slider showing how we have already got those reports into our new system based on Node.js, Elasticsearch, Leaflet (for 2D) and Cesium (for 3D).

[the future of ClimateViewer 3D]

Preview images of our work in progress, showing KML data in Leaflet.

On GitHub: https://github.com/rezn8d/netention JOIN THE TEAM! Use this form.

Discover how natural and artificial phenomena, from past to present, underground to outer space… might affect the quality and length of our futures.

Help us make The Climate Editor a reality

Imagine the Ferguson riots on The Climate Editor: If you are a programmer, please join our team by filling out this form and help us make this public resource a reality. Everyone else, please share this page, like us somewhere, and donate to help us get a good server to run this amazing new project! 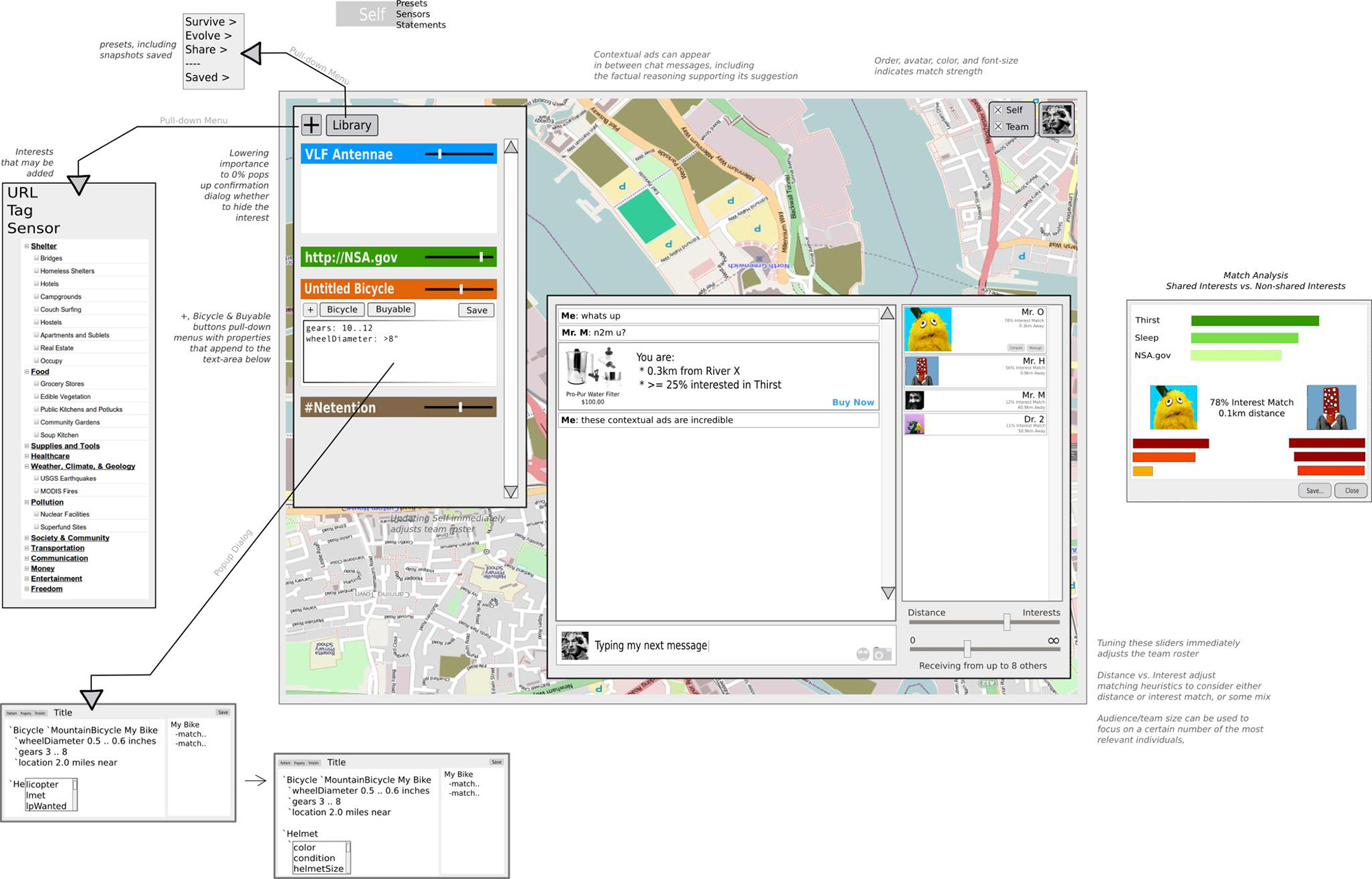 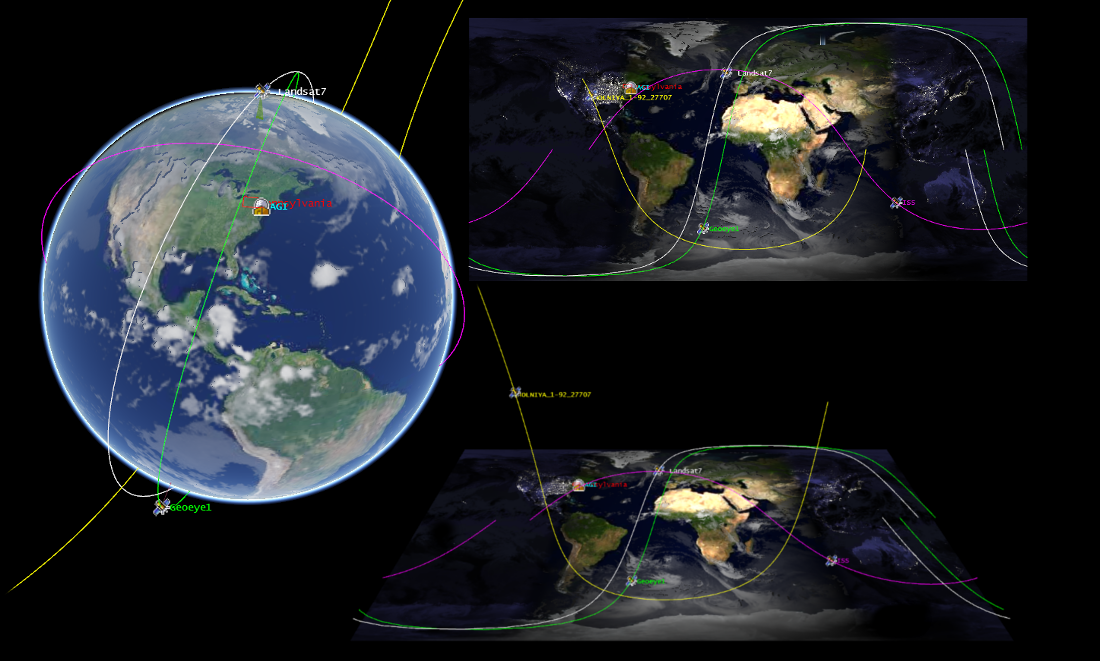 The Death of Google Earth and the old ClimateViewer 3D by Jim Lee is licensed under a Creative Commons Attribution-NonCommercial-ShareAlike 4.0 International License. Based on a work at climateviewer.com/. Permissions beyond the scope of this license may be available at climateviewer.com/terms.