It was a conspiracy! Military experiments on unsuspecting public

Below are well-documented examples of declassified experiments and chemical releases by the US. military on an unwitting public. 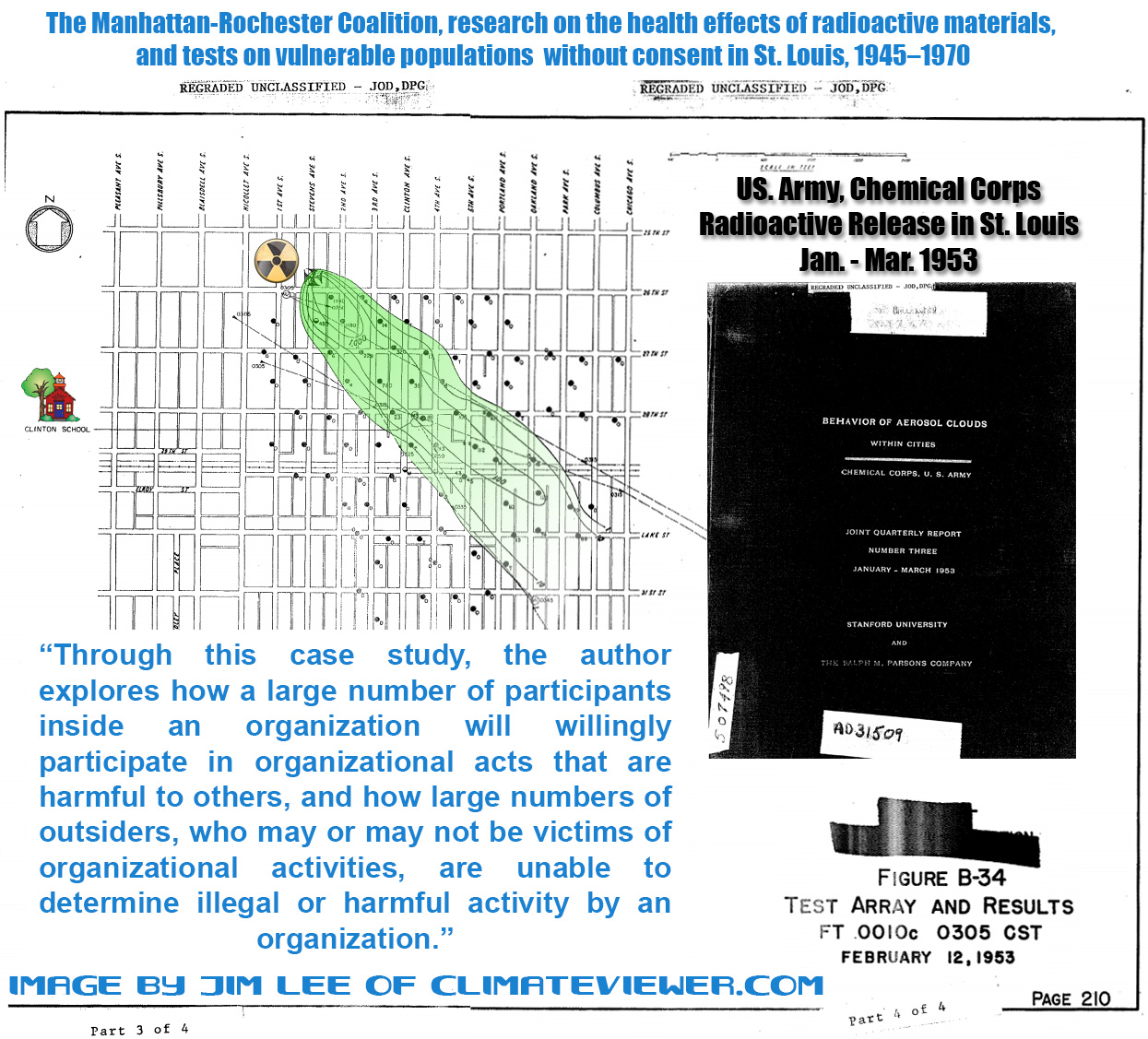 It may be hard for you to believe that your great nation is capable of conspiracy, but the facts do not lie. Below are well-documented examples of declassified experiments and chemical releases by the US. military on an unwitting public. 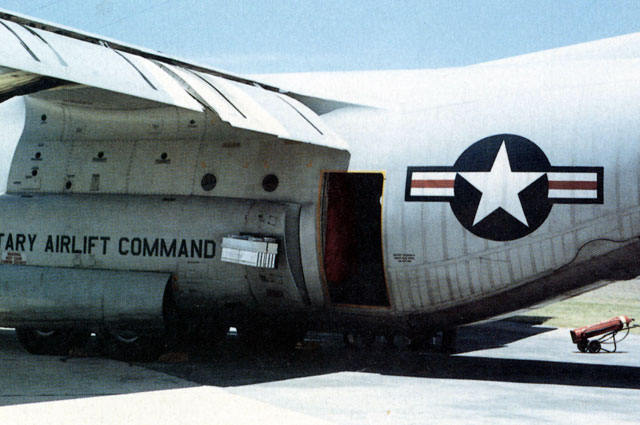 The US. Air Force sprayed silver and lead iodide into clouds above Vietnam to increase the normal monsoon rainfall, in secrecy from March 20, 1967 to July 5, 1972.

The program was authorized three WC-130 and two RF-4C aircraft with associated crews and maintenance personnel. These aircraft provided two WC-130 and one RF-4C sorties per day, when required. However, these aircraft, which operated out of Thailand, were not dedicated exclusively to the cloud seeding missions. The WC-130’s also conducted tropical typhoon reconnaissance and tactical weather reconnaissance support missions. RF-4C’s performed regular photo reconnaissance missions. The annual cost of the total program was approximately 3.6 million covering operation and maintenance, temporary duty pay, and seeding materials. [2]

US. military officials refused to admit their involvement in weather warfare, lying under oath during Congressional testimony:

Laird wasn’t the only official whose 1972 weather modification testimony was untruthful. Benjamin Forman, a senior Department of Defense lawyer, reiterated Laird’s denial later that year: “We have not, as Secretary Laird has previously said, ever engaged in weather modification activities in Northern Vietnam.” At the same hearing, the Deputy Director of the US Arms Control and Disarmament Agency had similar difficulties. Asked by Senator Pell if rainmaking projects had been approved by Laos and Thailand, Philip Farley replied: “I don’t wish even to admit, sir, that there were such projects.”

(US Senate, Subcommittee on Oceans and International Environment; 26 July 1972; p. 34 and 45) Originally “Top Secret”, this hearing transcript was made public on 19 May 1974. This was the first detailed public explanation of 1960s and 70s US weather modification programs in Southeast Asia.[4] Operation Ranch Hand, Operation Trail Dust, [3], [4], [5]

The herbicides were sprayed by the U.S. Air Force flying C-123s using the call sign “Hades”. The planes were fitted with specially developed spray tanks with a capacity of 1,000 U.S. gallons (4 m3) of herbicides. A plane sprayed a swath of land that was 80 meters wide and 16 km (~10 miles) long in about 4 and a half minutes, at a rate of about 3 U.S. gallons per acre (3 m3/km2). Sorties usually consisted of three to five airplanes flying side by side. 95% of the herbicides and defoliants used in the war were sprayed by the U.S. Air Force as part of Operation Ranch Hand. The remaining 5% were sprayed by the U.S. Chemical Corps, other military branches, and the Republic of Vietnam using hand sprayers, spray trucks, helicopters and boats, primarily around U.S. military installations [5]

Between 1961-1971 19,395,369 million gallons of herbicides were used in Vietnam which amounts to 5193 gallons daily. During the same period, “the US sprayed enough herbicides to cover 30,305 square miles or 23.8% of the total area of Vietnam with one spraying” (Arison, 1995) [6], [7] US. weather warfare and defoliation efforts over Vietnam led to the creation of the Environmental Modification Convention (ENMOD) on October 5, 1978, banning “widespread, long-lasting or severe” environmental modifications. [8]

For decades, the U.S. Army examined whether infected mosquitoes could be used to kill our enemies–so-called “entomological warfare.” In these excerpts from a March 1981 Army report, you can marvel at how much it would have cost to launch a yellow fever-infected mosquito attack on a city (with a handy “Cost per Death” chart included!). Also, you won’t want to miss summaries of prior government trials like”Operation Big Itch” and “Operation Big Buzz.” source: The Smoking Gun

This piece analyzes a covert Manhattan Project spin-off organization referred to here as the Manhattan-Rochester Coalition, and an obscure aerosol study in St. Louis, Missouri, conducted under contract by the U.S. military from 1953–1954, and 1963–1965. The military-sponsored studies targeted a segregated, high-density urban area, where low-income persons of color predominantly resided. Examination of the Manhattan-Rochester Coalition and the St. Louis aerosol studies, reveal their connections to each other, and to a much larger military project that secretly tested humans, both alive and deceased, in an effort to understand the effects of weaponized radiation. Through this case study, the author explores how a large number of participants inside an organization will willingly participate in organizational acts that are harmful to others, and how large numbers of outsiders, who may or may not be victims of organizational activities, are unable to determine illegal or harmful activity by an organization. The author explains how ethical and observational lapses are engineered by the organization through several specific mechanisms, in an effort to disable critical analysis, and prevent both internal and external dissent of harmful organizational actions. Through studying the process of complex organizational deviance, we can develop public policies that protect the public’s right to know, and construct checks and methods to minimize the chance of covert projects that are contrary to societal norms. [15] 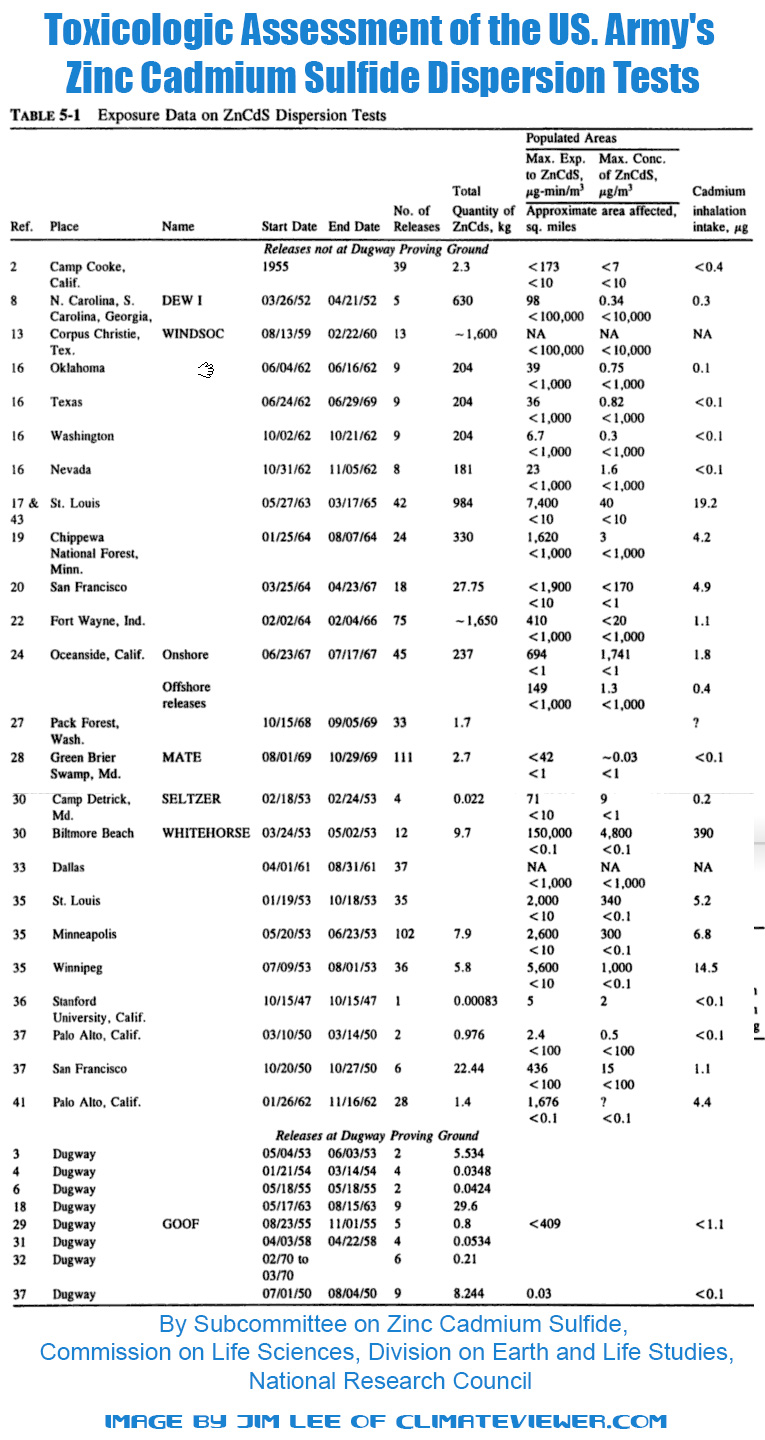 There you have it, several examples of the US. military operating secret tests. It makes one wonder, how long will it be before we find out what they are doing RIGHT NOW?

“Those who don’t know history are doomed to repeat it.” ― Edmund Burke

It was a conspiracy! Military experiments on unsuspecting public by Jim Lee is licensed under a Creative Commons Attribution-NonCommercial-ShareAlike 4.0 International License. Based on a work at climateviewer.com/. Permissions beyond the scope of this license may be available at climateviewer.com/terms.