February 11, 2014 – The Day We Fight Back Against the Five Eyes of Mass Surveillance!

Lawmakers must understand that we will no longer tolerate a surveillance state. An online protest on 11 February is a first step 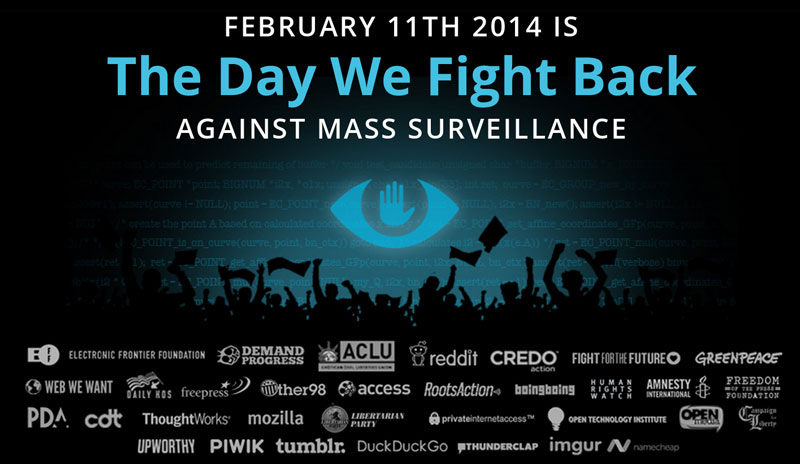 The Day We Fight Back is almost here. Although you may be distracted by so many things, you need to get involved on this momentous occasion! Please read every link, check out the maps, and share this with everyone, the 11th is almost here! Your future depends on this one!

Get ready: the day we fight back against mass surveillance is coming

Lawmakers must understand that we will no longer tolerate a surveillance state. An online protest on 11 February is a first step

Two years ago, major websites like Google, Reddit and Wikipedia went dark for a day. They were protesting the then-pending “Stop Online Piracy Act,” federal legislation that would have done enormous damage to the open internet by creating system of censorship and deterring digital-media innovators. The 18 January 2012 blackout created an outpouring of opposition from average Americans who suddenly realized what was at stake, and Congress backed off a bill that almost certainly would have passed otherwise.

There won’t be a website blackout next Tuesday, 11 February, but there will be another virtual call to arms. In the US the primary goal this time is to help reverse America’s retreat from liberty by telling lawmakers we can’t abide a surveillance state – and by insisting they vote for a measure, called the USA Freedom Act, that would begin to restore the civil liberties we’ve lost in recent times. (For people outside the US the goal will be similar, to push authorities toward policies favoring liberty and privacy.)

Next week’s protest organizers are calling it “The Day We Fight Back Against Mass Surveillance”. They’ve lined up an array of backers of various political persuasions. You don’t often see the American Civil Liberties Union on the same side of an issue as the very conservativeFreedomWorks, but they are this time.

The cynics will say, “Why bother?” They’ll note that the NSA and other security agencies in the US and abroad, urged on by a series of American presidents and other leaders, have ignored and broken laws with impunity. They’ll point out politicians’ epic hypocrisy; for example, members of Congress have supported the shredding of the Bill of Rights when presidents of their own party were in power, only protesting when the other party captured the White House. And they’ll assure us, even as public opinion turns against dragnet surveillance, that the next terrorist attack will swing the public mood back to the “keep me safe no matter what it takes” camp.

They’ll have a point. The relentlessness of the surveillance forces and their enablers in the technology industry, and the fecklessness of the politicians who are supposed to honor their oaths of office, make it hard to be optimistic. But realism doesn’t mean we should to give up.

The organizers of Fight Back are realistic. David Segal, a main organizer, is a former Rhode Island state representative and head of Demand Progress, an advocacy group founded by the late activist Aaron Swartz, who in turn was a key organizer of the fight against SOPA and, a year later, took his own life after being hounded by federal prosecutors on outrageously trumped-up charges. No one can doubt that Swartz would have been on the front lines of a day when we fight back, and it is dedicated in part to his memory.

Segal calls the 11 February event one step among many more we need to take – but an important one if it galvanizes enough people to do something at a key juncture.

“Right now we do think we have enough votes in the House to move the USA Freedom Act forward,” he told me this week. The main sponsor of the legislation, Jim Sensenbrenner, a Republican, is an author of the odious Bush-era Patriot Act that has been at the heart of the worst behavior by the NSA et al; he says it’s all gone too far, and more than 200 representatives have signed on.

At the Senate, it’s a different story. It’s controlled by Democrats who, for the most part, have been reluctant to challenge the Obama adminstration or who – like California’s Dianne Feinstein – have been ardent advocates for civil liberties abuses by administrations of both parties. So the Fight Back organizers are hoping Americans will call and write their senators first. Calls and letters from Americans whosesenators are on the Judiciary Committee, which will decide whether the legislation gets a genuine hearing, will be especially vital.

Even passage of this bill would be just a start. Another upcoming milestone will arrive next year when the Patriot Act is up for reauthorization, and the coalition that is gathering for the Fight Back effort will be essential then as well.

By the time you read this, you’ll be able to find some interactive images on the homepage of the Fight Back website – and code that you can use to embed them on your own website to help this campaign. It will be on my site. How about yours?

Fighting back will be a long, difficult process, and will take more than contacting members of Congress. But this is one useful activity, among many others we’ll need to try. Let’s not allow realism to turn to despair, meanwhile. The stakes are too high.

We’re not just dealing with the NSA, do not forget the Five Eyes!

February 11, 2014 – The Day We Fight Back Against the Five Eyes of Mass Surveillance! by Jim Lee is licensed under a Creative Commons Attribution-NonCommercial-ShareAlike 4.0 International License. Based on a work at climateviewer.com/. Permissions beyond the scope of this license may be available at climateviewer.com/terms.