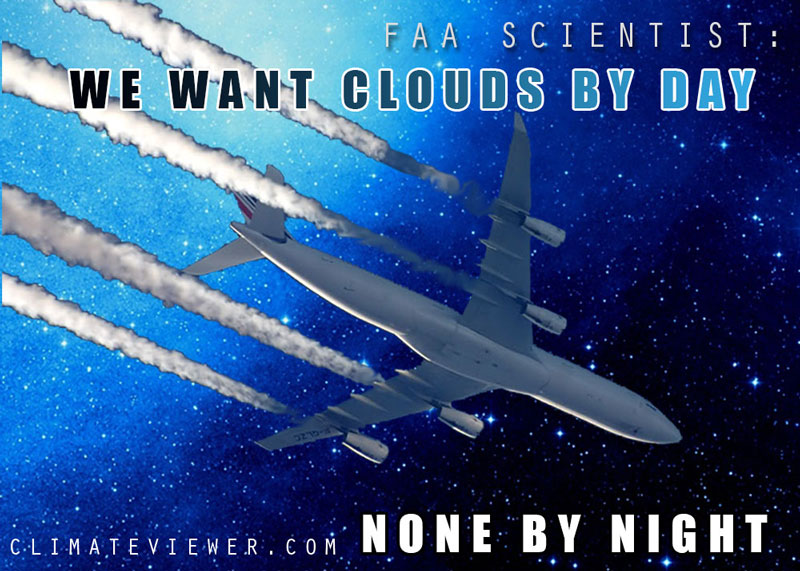 Here are the facts laid out as clearly as possible, backed by evidence, and finalized with an interview with the head of the FAA’s contrail clean-up crew: ACCRI.

Planes have made cirrus clouds that blanket the sky since 1948 based on my research (Thanks to Domenic Marrama for the 1941 and 1951 articles!): 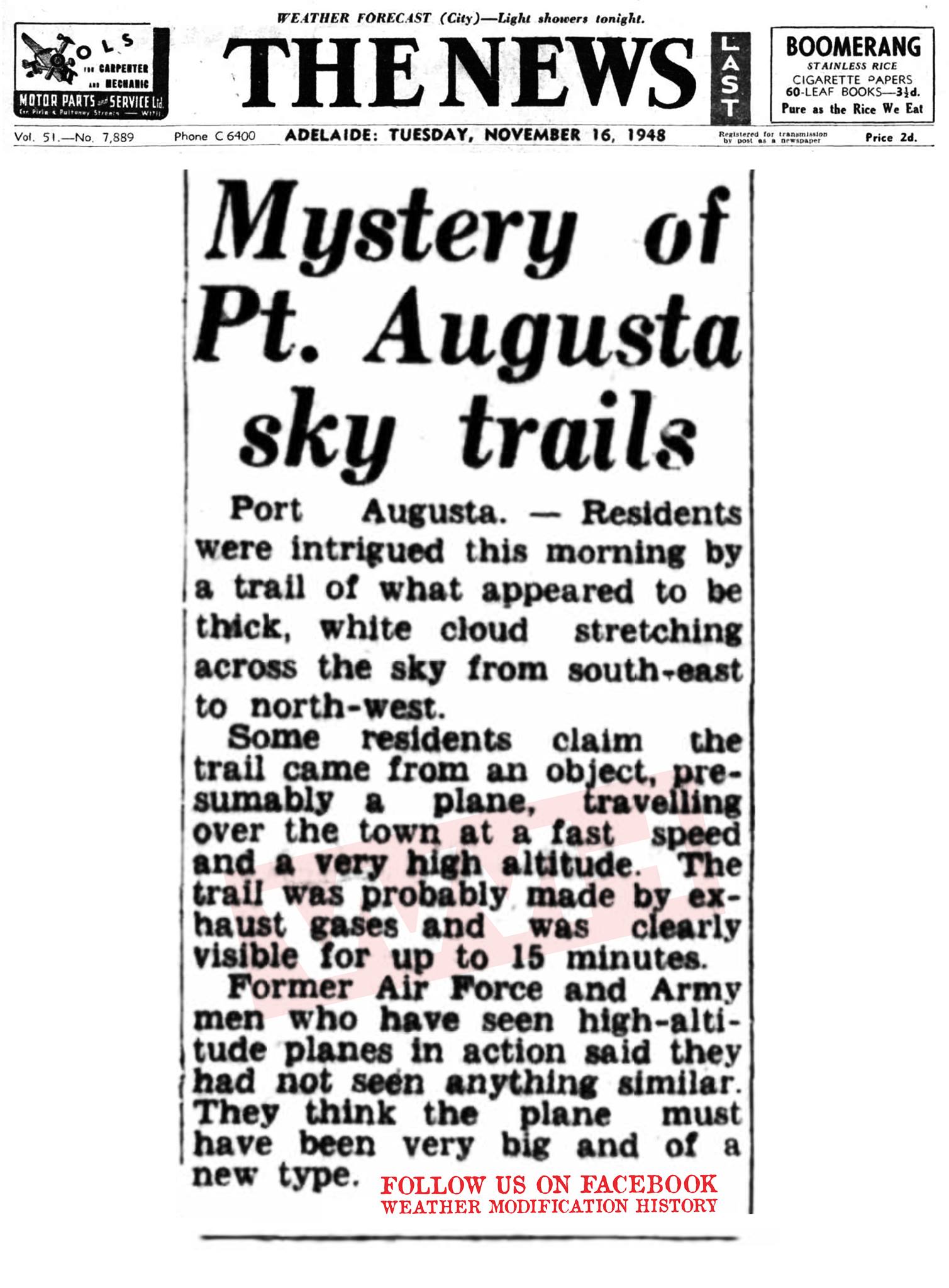 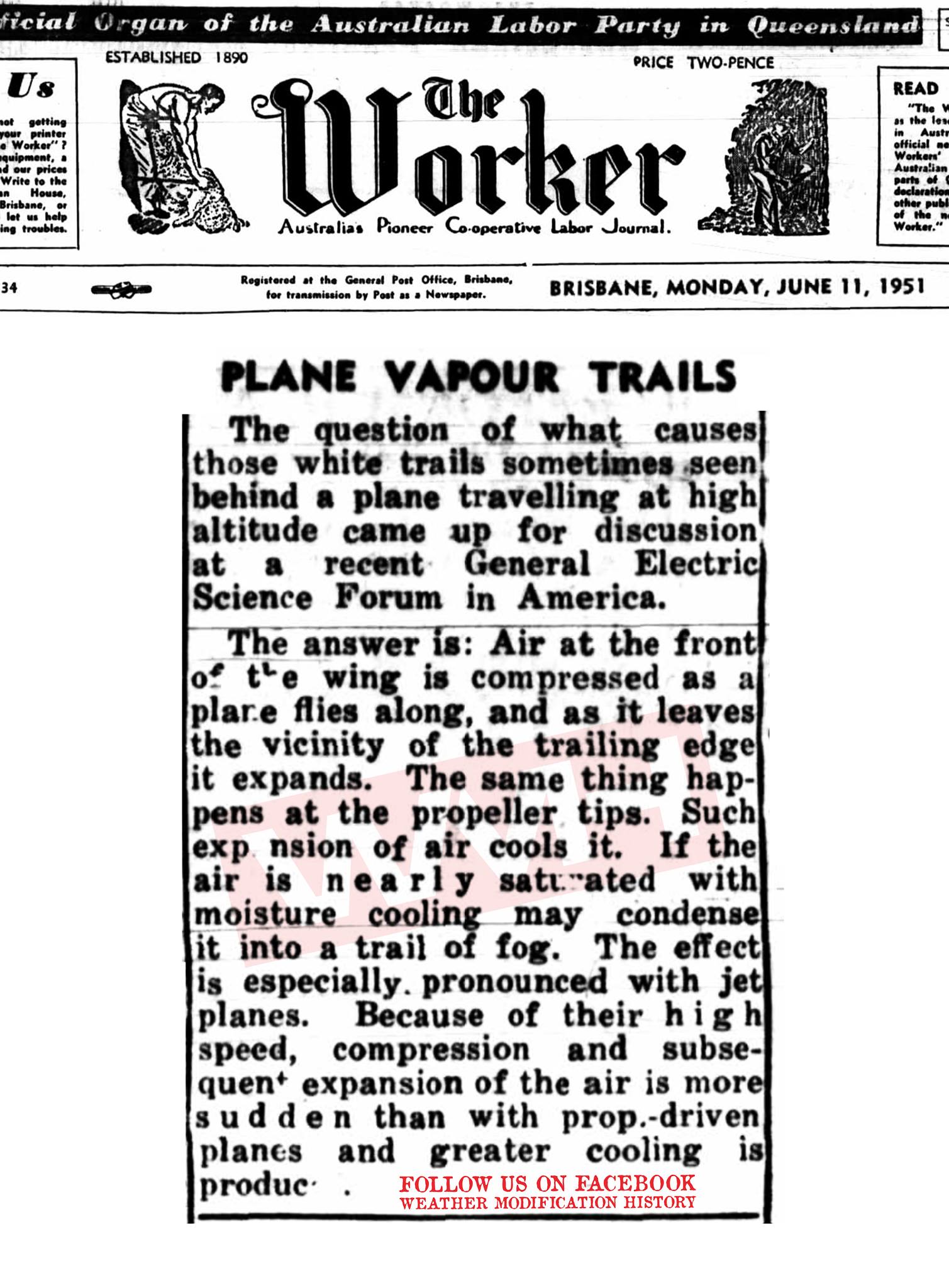 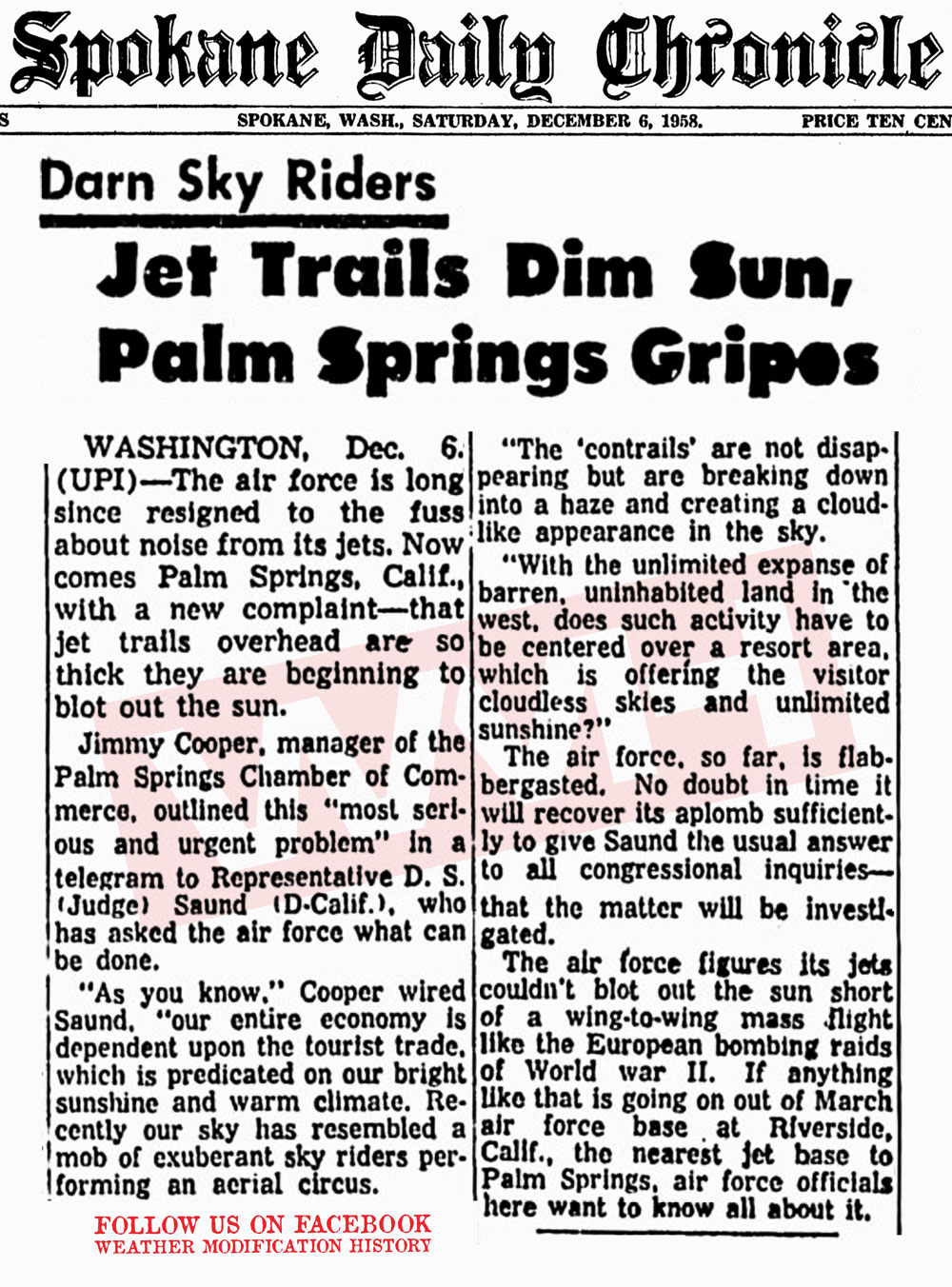 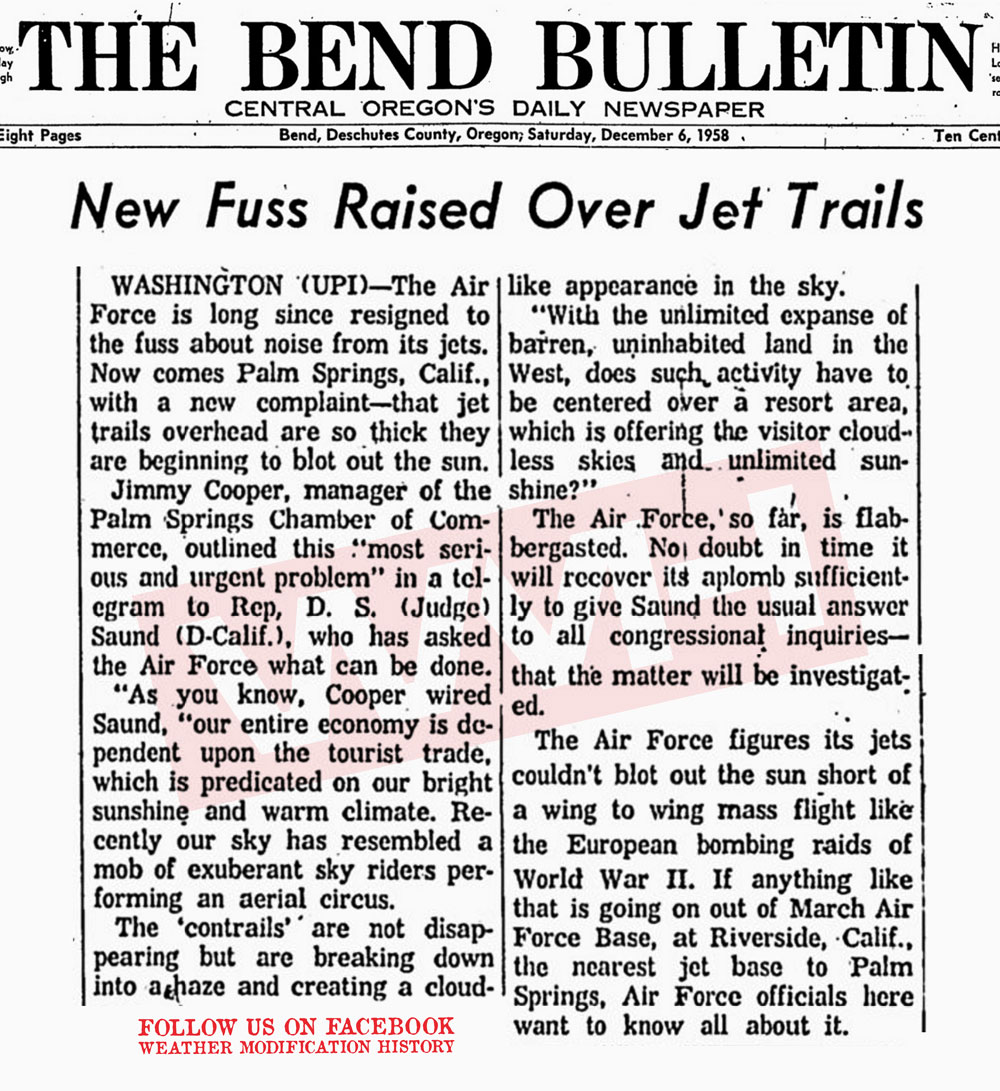 In 1970 the airline got sued by the state of Illinois and New Jersey for black belch (soot billowing from airports) and “smoke pollution of the skies.” Secretary of Transportation James Volpe mediated a discussion between the airline industry and the plaintiffs, wherein the airlines agreed to install “burner cans” in their jets. They claimed these redesigned combustors would reduce exhaust particles by 70% and this should results in cloud free days. 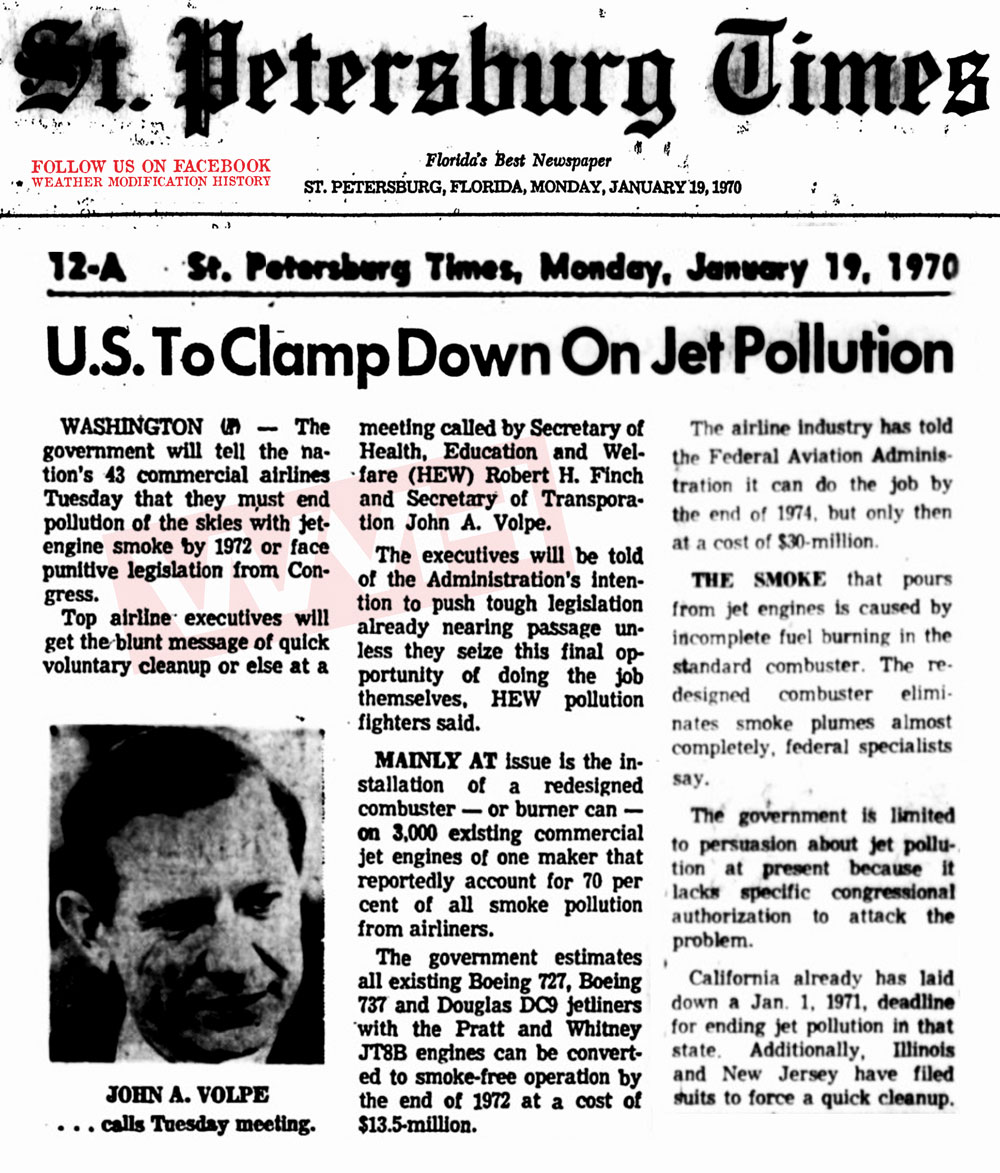 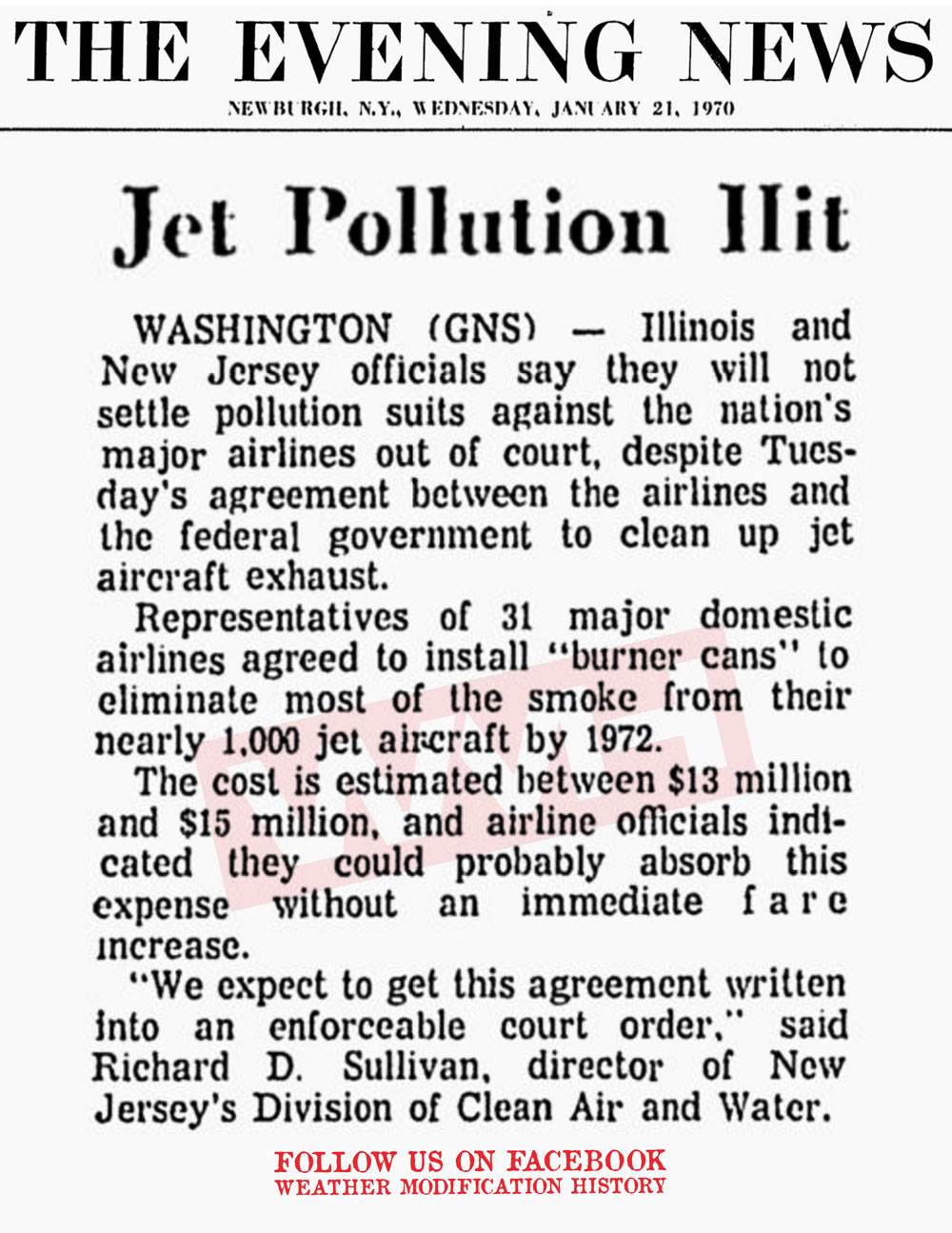 This video shows the mindset in pre-1980: contrail cirrus is a good thing!

“Unlike most changes in the atmosphere caused by man, this one is beneficial.” said Richard Semonin from the Illinois Institute of Natural Resources. “No one is trying to make clouds now using jet engines, but this study suggests that jet travel is inadvertently making our days more cloudy and some day, weather researchers may be able to use jets on purpose to change our weather.“

That was all fine until David Travis and company observed two F-16’s escorting Air Force 1 in an otherwise clear sky. This paper titled “Regional Variations in U.S. Diurnal Temperature Range for the 11–14 September 2001 Aircraft Groundings: Evidence of Jet Contrail Influence on Climate” made the case that contrail cirrus was actually trapping heat, making our nights warmer than they should be. 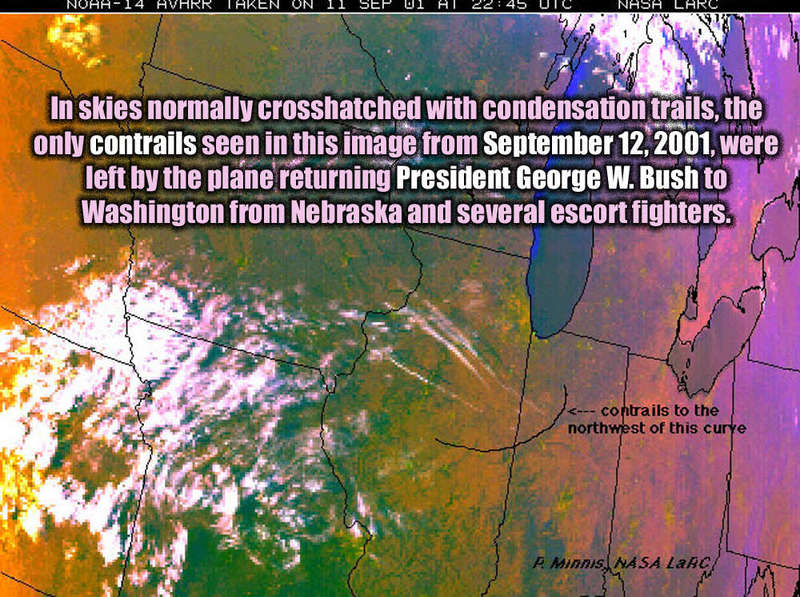 CBS News aired the bad news in a piece titled “Sky Graffiti Warming Up Earth?” in 2006. Contrails are lines of exhaust left by planes. It can be fun to watch them as they crisscross the sky. But as Anthony Mason reports, some people think they could spell trouble for the planet.

Then a second chance to see how bad this contrail cirrus problem is: the 2008 eruption of Eyjaffjalljokull grounded all flights over the UK.

A U.S. Air Force E3 AWACS radar plane was flying over the U.K. during this flight grounding and it created cirrus clouds that covered the entire island! Of course you know scientists freaked out:

The pictures show satellite thermal images of the evolving contrail. This was from a case study published by Jim Haywood and colleagues.

“A single aircraft operating in conditions favorable for persistent contrail formation appears to exert a contrail-induced radiative forcing some 5000 times greaterthan recent estimates of the average persistent contrail radiative forcing from the entire civil aviation fleet. This study emphasizes the need to establish whether similar events are common or highly unusual for a confident assessment of the total climate effect of aviation to be made.”

“Stratospheric aerosol increased surprisingly rapidly in that time, almost doubling during the decade,” Daniel said. “The increase in aerosols since 2000 implies a cooling effect” - NOAA study: Increase in particles high in Earth’s atmosphere has offset some recent climate warming

Also in 2011, the BBC tries to spin the results of these studies and summarily states:

after all the data was analyzed there was an increase in temperature… that suggests that contrails cool the planet.

This statement is the exact opposite of what the research suggested. #FakeNews

Finally in 2015 Chuck Long from NOAA’s ESRL CIRES dropped the bombshell: jet aircraft are creating ice haze that is brightening the sky, and this IS geoengineering….. accidentally.

Long suggests that a high-altitude “ice haze,” created by water and other emissions from aircraft, is responsible. “I’m talking about a sub-visual contrail-generated haze of ice, which we do not classify as a cloud but gives blue sky more of a whitish tint.” Long said.

Contrail cirrus clouds are always referred to as inadvertent or accidental, never intentional. All of that has changed.

Scientists have come to the conclusion that contrail cirrus clouds cool during the day but they trap too much heat at night.

There is a major scramble for a contrail pollution solution due to the 9-11 and 2008 research papers and the looming carbon taxes faced by the airline industry. The leading candidate for contrail control is geoengineering the jet fuel.

The idea is simple: change the type of cloud seeds (aerosols or cloud condensation nuclei CCN) coming out of the jet engines so they make clouds that do not trap heat. Generally speaking their plan is to reduce soot and add sulfur, this should make cooling clouds.

If the airline industry can pull it off they can claim they are doing climate mitigation and get carbon credits (cash) for making clouds instead of paying a hefty carbon tax bill.

I now present my interview with Dr. Rangasayi Halthore, head of the FAA Aviation Climate Change Research Initiative (ACCRI). He is also the head of the ACCESS flight experiments on biofuels and contrail control. Be sure to see the references I emailed the good doctor prior to our interview at the bottom of this article.

I hope you will learn this material, get engaged in a real discussion about contrail cirrus pollution and the attempts to geoengineer these clouds.

And now our featured presentation:

On The Climate Response to Cirrus Cloud Seeding

Geoengineering Activists vs. the US EPA (Hearing 2015) https://weathermodificationhistory.com/index.html?post=epa-flight-pollution-hearing

Jim Lee, “My Speech to the EPA about Flight Pollution,” https://climateviewer.com/2015/08/09/my-speech-to-the-epa-about-flight-pollution/

“Options for dispersing gases from planes include the addition of sulfur to the fuel, which would release the aerosol through the exhaust system of the plane, or the attachment of a nozzle to release the sulfur from its own tank within the plane, which would be the better option.” http://climate.envsci.rutgers.edu/pdf/GRLreview2.pdf

“The particles may be seeded by dispersal from seeding aircraft; one exemplary technique may be via the jet fuel as suggested by prior work regarding the metallic particles. Once the tiny particles have been dispersed into the atmosphere, the particles may remain in suspension for up to one year.” http://www.freepatentsonline.com/5003186.html

A potential delivery mechanism for the seeding material is already in place: the airline industry. Since seeding aerosol residence times in the troposphere are relatively short, the climate might return to its normal state within months after stopping the geoengineering experiment. The main known drawback to this approach is that it would not stop ocean acidification. It does not have many of the drawbacks that stratospheric injection of sulfur species has. http://iopscience.iop.org/1748-9326/4/4/045102

“Direct detection of total sulfuric acid (SA) has been achieved for the first time in the plume of a jet aircraft in flight. The measurements show the same SA signatures for the case when SA was injected directly into the exhaust jet and the case when sulfur was provided to the engine with the fuel.” http://onlinelibrary.wiley.com/doi/10.1029/98GL00512/pdf

“Another technique examined was the use of commercial passenger aircraft flying at high altitudes to inject sulphate aerosols, emitted by aviation fuel, into the stratosphere.http://web.archive.org/web/20150314160918/http://www.apropos.fi/Tiedostot/Tiedostot/FICCA/FICCA%2016.04.2013/Posters/FICCA_poster_Partanen_COOL.pdf http://web.archive.org/web/20150314161010/http://www.aka.fi/en-GB/A/Programmes-and-cooperation/Academy-programmes/Etusivun-elementit/Researchers-look-into-geoengineering-possibilities/ https://weathermodificationhistory.com/index.html?post=ficca-cool

FAA Scientist: We Want Clouds By Day, None By Night by Jim Lee is licensed under a Creative Commons Attribution-NonCommercial-ShareAlike 4.0 International License. Based on a work at climateviewer.com/. Permissions beyond the scope of this license may be available at climateviewer.com/terms.