cientists think they can mimic volcanoes’ natural process of cooling our planet by spraying sulfur into the sky using planes, drones, and floating hoses. 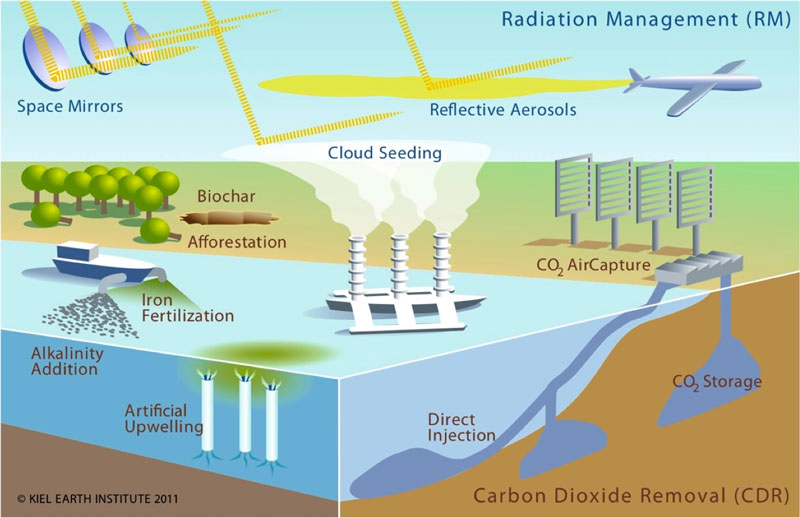 Geoengineering SRM is a dangerous idea. Scientists think they can mimic volcanoes’ natural process of cooling our planet by spraying sulfur into the sky using planes, drones, and floating hoses. You cannot solve pollution with more pollution, and Geoengineering SRM proponents cannot predict nor control the weather. After 60 years of cloud-seeding, the weather modification industry cannot accurately predict the outcomes of their “experiments” on a small scale so why would anyone believe it is possible to regulate global temperatures using weather manipulation techniques worldwide? Let us start with a video explaining exactly what SRM is:

Backed by Bill Gates’ FICER money, Ken Caldeira and David Keith are funding research and modeling of Geoengineering SRM in preparation for a not-to-distant future when SRM can be deployed as an Operation Last Hope. Mr. Gates is so sure that SRM is a winner, his company Intellectual Ventures Lab has already developed a hose-to-the-sky: The Stratoshield.

What are other scientists saying about this crazy idea?

WMO DOCUMENTS ON WEATHER MODIFICATION Updated in the meeting of the Expert Team on Weather Modification Research Abu Dhabi, 22-24 March 2010

This paper was a response to claims that Meteo Systems “WeatherTec” used electro-magnetic signals to create rain clouds over the deserts of Abu Dhabi. The WMO expert team was not impressed and left us with the following statement:

It should be realized that the energy involved in weather systems is so large that it is impossible to create artificially rain storms, alter wind patterns to bring water vapour into a region, or completely eliminate severe weather phenomena. Weather Modification technologies that are claimed to achieve such large scale or dramatic effects do not have a sound scientific basis (eg. hail canons, ionization methods) should be treated with suspicion. The only credible approach to modifying weather is to take advantage of microphysical sensitivities wherein a relatively small human-induced disturbance in the system can substantially alter the natural evolution of atmospheric processes. 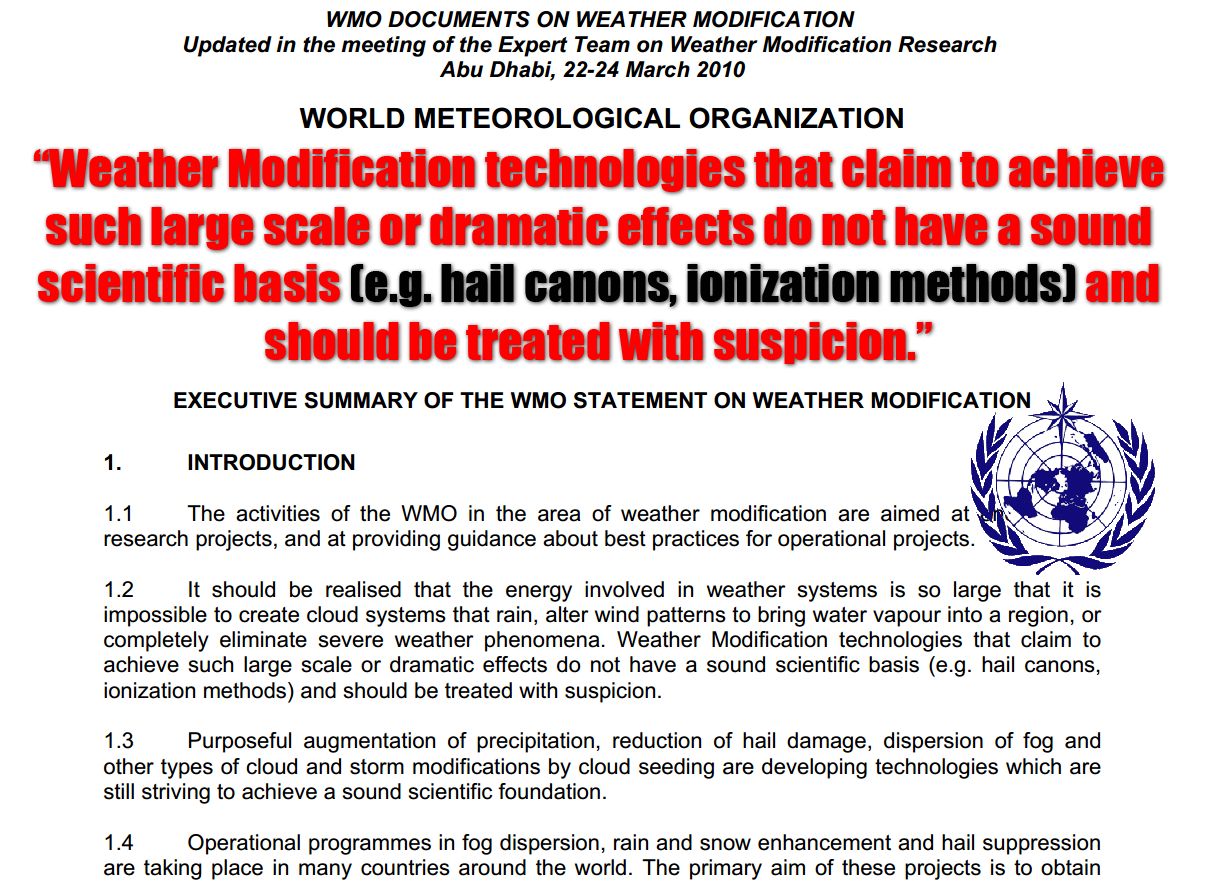 Geoengineering the Climate System: A Policy Statement of the American Meteorological Society (Readopted by the AMS Council on 6 January 2013)

Reflecting sunlight would likely reduce Earth’s average temperature but could also change global circulation patterns with potentially serious consequences such as changing storm tracks and precipitation patterns. As with inadvertent human-induced climate change, the consequences of reflecting sunlight would almost certainly not be the same for all nations and peoples, thus raising legal, ethical, diplomatic, and national security concerns.

Geoengineering will not substitute for either aggressive mitigation or proactive adaptation, but it could contribute to a comprehensive risk management strategy to slow climate change and alleviate some of its negative impacts. The potential to help society cope with climate change and the risks of adverse consequences imply a need for adequate research, appropriate regulation, and transparent deliberation.

Despite the clear and present dangers of the problem (climate change) and solution (geoengineering SRM), the science community marches forward in denial trying to frame the debate in a way to make poor people swallow the bitter SRM pill:

The Science of Geoengineering - Annual Review of Earth and Planetary Sciences

Carbon dioxide emissions from the burning of coal, oil, and gas are increasing atmospheric carbon dioxide concentrations. These increased concentrations cause additional energy to be retained in Earth’s climate system, thus increasing Earth’s temperature. Various methods have been proposed to prevent this temperature increase either by reflecting to space sunlight that would otherwise warm Earth or by removing carbon dioxide from the atmosphere. Such intentional alteration of planetary-scale processes has been termed geoengineering. The first category of geoengineering method, solar geoengineering (also known as solar radiation management, or SRM), raises novel global-scale governance and environmental issues. Some SRM approaches are thought to be low in cost, so the scale of SRM deployment will likely depend primarily on considerations of risk. The second category of geoengineering method, carbon dioxide removal (CDR), raises issues related primarily to scale, cost, effectiveness, and local environmental consequences. The scale of CDR deployment will likely depend primarily on cost.
Read the full article here. 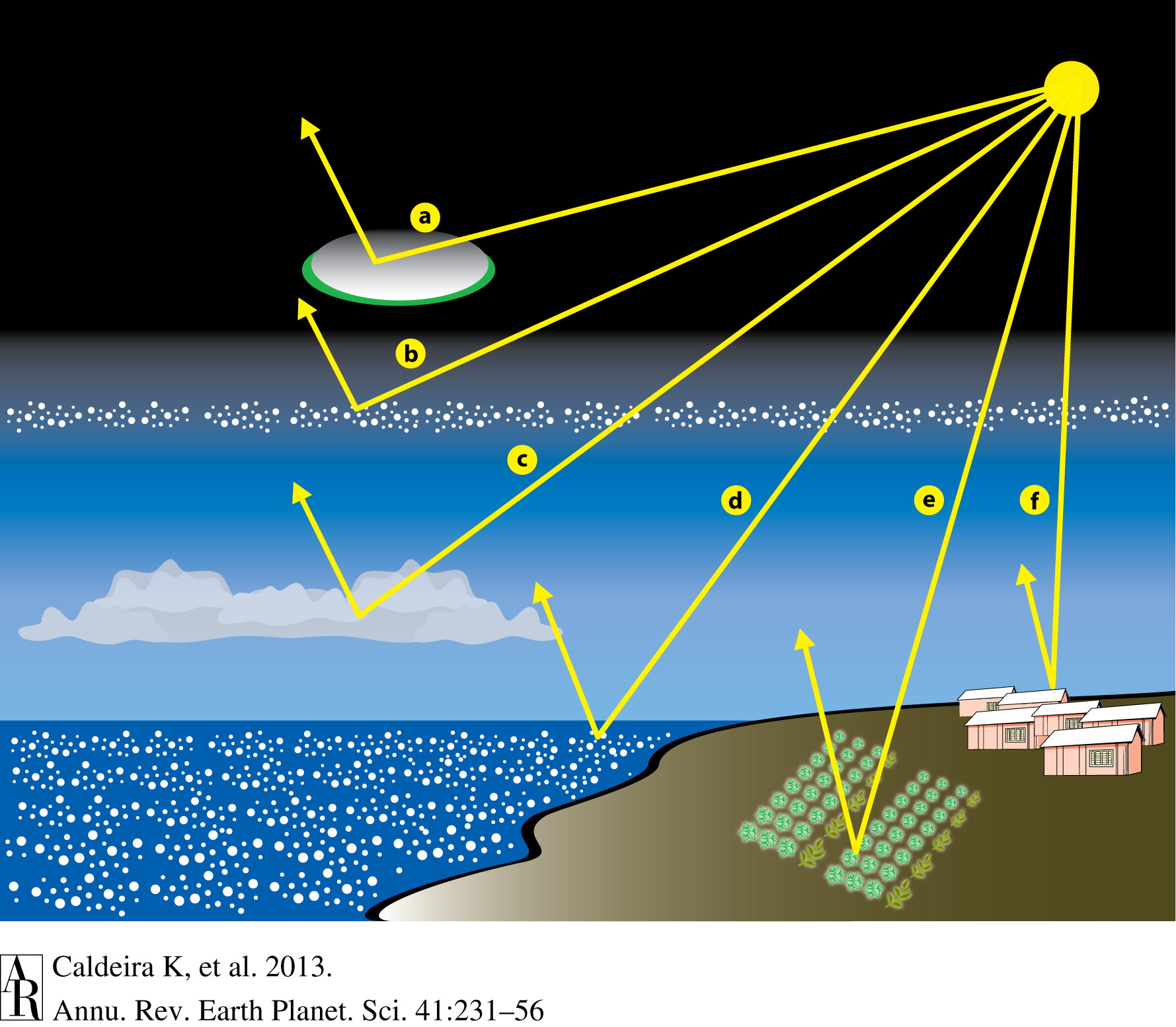 Stratospheric injection of sulphate aerosols has been advocated as an emergency geoengineering measure to tackle dangerous climate change, or as a stop-gap until atmospheric carbon dioxide levels are reduced. But it may not prove to be the game-changer that some imagine.

A quantitative evaluation of the public response to climate engineering

Atmospheric greenhouse gas concentrations continue to increase, with CO2 passing 400 parts per million in May 2013. To avoid severe climate change and the attendant economic and social dislocation, existing energy efficiency and emissions control initiatives may need support from some form of climate engineering. As climate engineering will be controversial, there is a pressing need to inform the public and understand their concerns before policy decisions are taken. So far, engagement has been exploratory, small-scale or technique-specific. We depart from past research to draw on the associative methods used by corporations to evaluate brands. A systematic, quantitative and comparative approach for evaluating public reaction to climate engineering is developed. Its application reveals that the overall public evaluation of climate engineering is negative. Where there are positive associations they favour carbon dioxide removal (CDR) over solar radiation management (SRM) techniques. Therefore, as SRM techniques become more widely known they are more likely to elicit negative reactions. Two climate engineering techniques, enhanced weathering and cloud brightening, have indistinct concept images and so are less likely to draw public attention than other CDR or SRM techniques.

We hate SRM. Please stop talking about spraying the skies with chemicals before every “chemtrail” aficionado tars and feathers you.

The moral of this story:

So what’s the difference?

Scientists are planning to kill people before nature gets the chance.

Geoengineering SRM: Dark Clouds and Shady Solutions by Jim Lee is licensed under a Creative Commons Attribution-NonCommercial-ShareAlike 4.0 International License. Based on a work at climateviewer.com/. Permissions beyond the scope of this license may be available at climateviewer.com/terms.